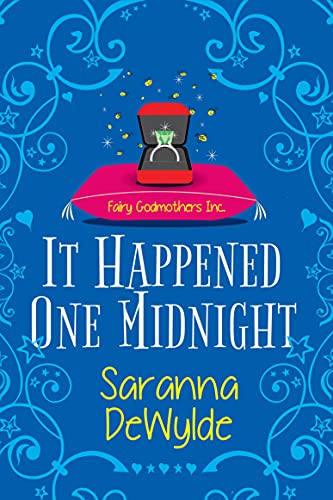 CAN YOU SKIP THE STORYBOOK BEGINNING…

Novelist Juniper Blossom has romance down to a science in her bestselling books. But she’s not about to settle for just any man—a happy ending looks different for everyone, and she needs to find the guy whose idea of forever matches her own. Try telling that to her adorable, meddling grandmothers, though. If she doesn’t find a man soon, they’re going to find one for her. This is why Juniper has prepared for a trip home to Ever After by fibbing that her sexy, smart, sweet best friend Tomas is her fiancé! He doesn’t believe in love at all, but that doesn’t matter if they’re just pretending…

ON THE WAY TO THE HAPPY ENDING?

Divorce attorney Tomas Rivera is as proud of Juniper’s authorial success as she is, but that doesn’t mean he buys into her books’ premise. His career is proof enough that true love is the real fairy tale—and everyone knows fairy tales aren’t real. But he can never say no to gorgeous Juniper, and an “engagement” might move him one legal brief closer to partner at his old-fashioned firm. Yet playing the part suddenly starts to mean feeling it, especially when a kiss just for show turns up the heat between them. Is happily ever after possible for two people who aren’t on the same page when it comes to love?

It Happened One Midnight is the third title in the Fairy Godmothers, Inc. series.  I hadn’t read the first stories in the series, but didn’t feel the least bit lost as anything I really needed to know was within the dialogue or narrative.  However, I will go looking for those first two stories as I’d like to know how this series started, and how those earlier romances came about.

I confess, I giggled throughout It Happened One Midnight.  Three grandmothers who also happen to be fairy godmothers, a magical small town, strange happenings going on, and love in the air everywhere… what’s not to love about that, really?  Juniper is a romance novelist who is holding out for that “perfect” man.  She may write about finding love in unlikely pairings, but she knows what she wants, a soulmate who thinks exactly as she does on everything and blends in with her life with ease.  Ah, yeah, that’s not usually how love works but good try, girl.  Juniper is heading back home and she’s not about to be paired off by her grandmothers so she’s thinking ahead of the game by asking her best friend to temporarily become “engaged” to stop their matchmaking efforts.  And, yeah, we probably can guess how that goes but it was such fun seeing how Juniper and Thomas finally got their heads on straight enough to not only believe in love but to be in love with each other.

Thomas is a firm believer in the “love is just a physical reaction to attraction” camp.  He does not believe in everlasting love, and being a divorce lawyer he does get to see people at their worst when their marriages break up.  But he’s not buying that there’s someone out there perfect for him in every way.  So, sure he’ll go along with being engaged to his best friend, especially as that little lie will help him at the old-fashioned law firm he works for as well.  I loved watching these people two fall heart first into love – and all the magical elements as well.