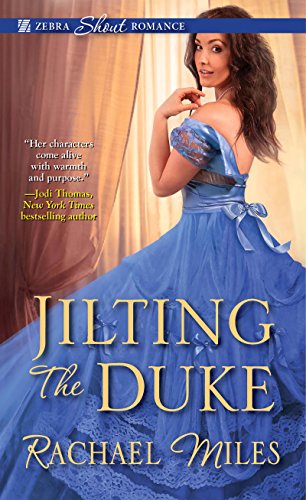 ‘Jilting the Duke‘ begins ‘The Muses’ Salon‘ series with an intriguing romance that started years ago and has undergone some drastic changes as we approach this couple’s present situation.  I originally reviewed this title in 2016, since then I’ve purchased the other titles (including two novellas that make up one complete story) and have the latest one as an ARC which will be released in a few days.  I looked back over those other reviews and realized that I needed to do some reading before starting that ARC – so, you’ll discover the previous stories in ‘The Muses’ Salon‘ series on a daily basis leading up to the release of ‘Brazen in Blue‘.  I don’t always re-read complete series, but enough time has passed that I wanted a clearer picture in my mind before diving into the newest.  And although read for my own pleasure, not all of these titles got the reviews they deserved, so that’s part of the reason for the daily trips back to this series.  This review is a combination of parts of my original and more current thoughts from the re-read.  But it certainly is an emotional, enjoyable story no matter when it was written or read, so I’d encourage you to look it up and indulge yourself a bit.

With a tale of a certainly not young miss and her first throes of affection (although our couple did start that way long ago), we are given the story of the sacrifices that love will make, even when it hurts like nothing else. To learn, and acknowledge, that there is more than one type of love in the world of relationships – and that’s not a bad thing under most circumstances.

Secrets, subterfuge, and not a little poking at what should be obvious to anyone, this is a story that will keep readers engaged, searching for clues throughout the journey, and finding the satisfaction of love conquering the worst we can believe of a loved one prior to finding the truth.

Aidan and Sophia were young lovers before he went away. Certain he was not the heir to his father’s position as Duke (a completely poor Duke at that), Aidan made the decision that the army would be his way in the world. His love for Sophia was strong, and if they jumped the gun a bit, they were secretly engaged so no one would ever be the wiser… after all, they would be married upon his return.

Except for life often doesn’t work out as we planned. Weeks after Aidan left she married another man and moved to Italy. Her life was good, she drew the plants illustrations for her husband’s work as a botanist, and if the headstrong love that she had with Aidan was missing, if there were secrets piled upon secrets in her marriage – well, at least she had her son, Ian.

When her husband, Tom, died it was eventually revealed to her through a letter that her husband wished for her to return to England and raise their son in their homeland. Even more concerning was his request that Aidan becomes her son’s co-guardian, overseeing his education and growth as a gentleman under both of their watchful eyes. This was perhaps the last thing Sophia wanted to do, but she heeded her deceased husband’s request.

A lot can change for a man over a decade. Now Aidan was the Duke, after the deaths of his father and brothers. The absolute last position he ever expected to be in. His work in the army has trained him well in all manner of secrets and how to ferret them out. His heartbreak (if he would admit to that feeling) at Sophia’s betrayal of marrying another man has had a long time to grow and fester within him. Now that she has returned home, he is plotting the perfect revenge.

He didn’t count on still loving her. Or the secrets that they all carried.

I was so involved in ‘Jilting The Duke‘. An enjoyable mystery, secrets galore, a couple who definitely loved each other still, one obvious secret that somehow the great spy missed (grin) – and the small details to attention that take a story from good to amazing. All that awaits you when you decide to pick up this very good, solid, engaging debut story by Rachael Miles. Definitely recommend this one, go on take the risk on a new to you author, I’m betting you’ll be pleasantly surprised.  I enjoyed Aidan and Sophia’s romance very much, it felt realistic for the times, had enough steamy moments to tempt me, and enough mystery to keep me flipping pages on my Kindle.  This re-read was a good reminder that it makes no difference what the publication date is, a good story is timeless.

I originally had received an ARC of ‘Jilting the Duke‘ from Kensington Books through NetGalley.  I have since purchased my own copy.

Available in paperback, audio, or your favorite e-reader. Mine is the Kindle