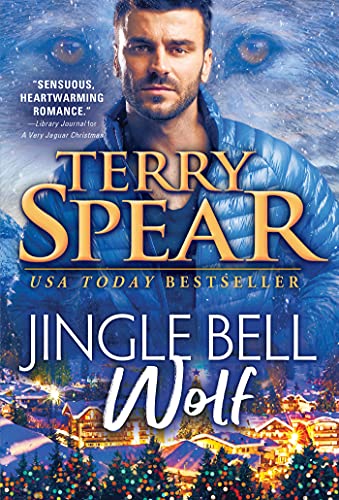 It’s almost Christmas, and Florida gray wolf shifter and veterinarian Gabrielle Lowe has grudgingly agreed to go with her friends to a ski resort in Silver Town, Colorado. But when her two jaguar shifter girlfriends are held up on a mission, it not only leaves Gabrielle alone for the holidays but also out of her element at the snowy resort. Determined to make the best of it, Gabrielle takes a dip in the lodge’s heated pool after it’s closed, causing all kinds of trouble…

Gray wolf shifter Landon Wolff, co-owner of the ski lodge, has enough on his plate getting ready for the annual influx of Christmas visitors. The last thing he needs is someone indulging in a midnight swim long after the pool is closed. Just as he’s about to throw the rule-breaker out of the pool he realizes that she is also a wolf. Suddenly, all the rules change… Maybe Landon will finally find the she-wolf he’s always wanted to share the holidays with.

Most of Terry Spear’s stories have a connection in some way to the main series, Heart of the Wolf.  The Wolff Brothers series is closely connected to the Silver Town Wolf sub-series.

It just wouldn’t be Christmas time for this Paranormal Romance/Shifter Romance lover without another installment in either the worlds of Silver Town Wolves or Heart of the Wolf series without a holiday story – and this time we get to go forward in the sub-series, Wolff Brothers, for another intense, funny, and romantic adventure this time with Landon and Gabrielle in Jingle Bell Wolf.

Gabriella, a wolf shifter from Florida, is vacationing at the local ski lodge – or she’s supposed to be with her friends but they’ve been delayed for a bit so she’s on her own.  Deciding to take a swim in the heated pool after closing hours might not have been her wisest idea, but it was so tempting.  Busted by one angry wolf, Gabriella gets an up-close and personal introduction to Landon, co-owner of the lodge.  This trip just might have some advantages after all.

Landon’s been searching for his mate or at least keeping a keen eye out for her to show up in his life.  He doesn’t expect the misbehaving guest swimming after hours in the pool to be more than a trouble-maker.  But once discovering that Gabriella’s not only a wolf shifter, a guest, and a very interesting female Landon calms down enough to actually talk to the lovely lady.  Since she’s on her own and has a bit of a fear of skiing, Landon will offer to teach her and show her around town.  Gabriella has an intense dislike of change, she fights it at every opportunity so getting her to actually put on skis and giving this a shot is probably a bigger deal than Landon ever imagined.

With an intense attraction fueling their time together, some background shenanigans by her friends, and the chance to take over the veterinarian practice in Silver Town – well, Gabriella’s dislike of change just might need to be overcome.  I had such fun with Jingle Bell Wolf.  A likable couple, the chance to revisit a town I love, seeing familiar faces again from previous stories all combined to make this one an enjoyable trip back to a world I love.

If you love Paranormal Romance, especially Shifter Romance then you’ll want to check out Jingle Bell Wolf for yourself – and perhaps discover a fascinating new world (if you aren’t already addicted to Heart of the Wolf or Silver Town stories).