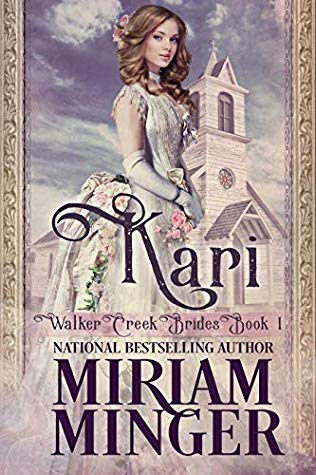 Kari Hagen didn’t want to come to Walker Creek, Texas, but she made a promise.  She’s supposed to deliver a letter to her late mother’s first love, so now she just has to find him. Should she accept an offer of assistance from that tall cowboy who’s as handsome as any man she’s ever seen? The sooner Mr. Caleb Walker gets her mother’s letter, the sooner Kari can get busy earning money as a seamstress for her train fare back to Minnesota!

Seth Davis isn’t expecting any surprises when he meets the train. He plans to pick up his uncle’s new racehorse and head back to Walker Creek Ranch. Yet what about that pretty little miss standing alone on the platform…all honey-gold curls, blue calico, and no taller than his chin? Is she lost? He’s never seen her before, though she looks oddly familiar, something telling Seth that his day just got a whole lot more interesting.

Walker Creek Brides, a sweet Western historical romance series by award-winning author Miriam Minger that reminds us angels are near and love is where you least expect to find it.

KARI is the first story in the Walker Creek Brides series by a new-to-me author, Miriam Minger.  It was so easy to get caught up in Kari’s experiences as she travels West to hand-deliver a letter for her recently deceased mother.  It must be of some major importance for her mother made it her dying wish and swore all of her children to fulfill it, no matter what.  So Kari finds herself on a train headed for Walker Creek, Texas with no idea how her future is about to change.

This is a short-ish story but it packs an emotional punch and lays the groundwork for the rest of the series very easily without information dumps.  If you love a sweet romance with an angel’s touch or enjoy the Cowboys and Angels multi-author series, then you’re going to love the Walker Creek Brides series.

I enjoyed Seth and Kari together, even though they would have a few roadblocks and stumbles put in their path to a happy ending.  Some of this story I cannot tell you about for that would spoil it for future readers.  The majority of what you really need to know is up there in the Cover Description.  However, put together the possibility of an angel’s visit, two people who seem destined to meet and fall in love, and one man’s complete turn around from the angry, vengeful, controlling man he was to a man who cherishes the gifts given to him including his family… then you’re definitely going to want to pick up this first story and get hooked on a series.

I had such fun with KARI and I’ll be watching for INGRID to release in the fall.