Karma’s A Witch by Lanie Jordan 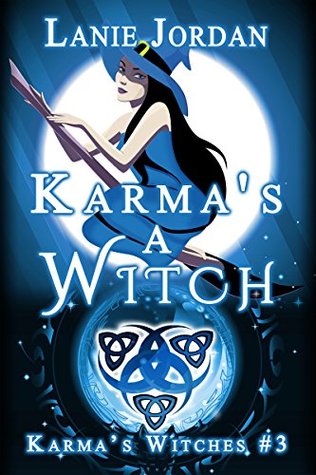 Despite the weird name and the whole adoption thing, Topaz’s life is pretty average. She has a boss she doesn’t like, a cat who thinks the world revolves around her, a best friend she’s crushed on for years, and a day job that keeps her from her dream job of being an author. All perfectly normal things.

But everything changes when she slips on a letter that appears out of nowhere. The letter–written by her biological mother–proves just how abnormal things really are. Not only does she have two sisters, but she’s also a hereditary witch.

Just when Topaz starts thinking that maybe there’s something to this magic thing, she learns a lesson all new witches learn: Magic isn’t all it’s cracked up to be. And sometimes, Karma can be a real witch.

Read on for my thoughts on Karma’s A Witch.  No true spoilers, promise.

Live.  Love.  Learn.  Wise words at any point in life.  Even more powerful when three sisters, witches each, finally meet after being separated for far too many long years.

Topaz, or Paz as she is called often had been crushing on her friend and co-worker Ryan for years now.  Hoping that someday he’d wise up and see her for the fantastic woman she actually was.  Yeah, right.  One can dream.  Paz might be surprised at what the future holds for her.

Paz also got her gift from her birth mother.  Although for her the letter actually tripped her up as she slid on it as it lay on the kitchen floor.  And maybe her Book of Shadows went missing for a little bit, but it magickally arrived right at the moment it was supposed to.  When Paz cast her first spell neither she nor Ryan saw much happen.  But they were in for quite an adventure before that eventual writer’s conference.

In Karma’s A Witch, Topaz already had her mate at her side unlike her sisters Amber and Amethyst who discovered them soon after their powers came to them.  Oh, Paz and Ryan are only at the beginning of their romantic relationship and it will take a few bumps and bruises before they get it all straightened out.  But… even the most opened minded male might not simply truly and honestly believe in witches and magick and quests at first.  In the previous stories in this series Geoff and Shawn rather easily believed and accepted their mate’s magick abilities.  While Ryan says he believes, it’s more of a tongue in cheek meaning… he wants to believe, but it will take a bit of time and misadventures.

And when you think about it – it truly is a pretty amazing thing to just have dropped on you one day.  Hey, I like you but I’m a witch with powers I don’t know how to control yet so here’s a safety helmet… yeah, doesn’t happen that way.  It’s an acceptance, a belief, a trust in the person.  And it makes perfect sense to me that Ryan might want to but has some misgivings that get him into a load of hot water with Paz.

I enjoyed Karma’s A Witch and the introduction of the three sisters who make up the series Karma’s Witches very much.  Now, I’ll be downloading the next story that continues Amber, Amethyst and Topaz’s amazing journey.

Right now this series is available for those with the Kindle Unlimited plan, but not sure for how long that will be.

Haunting Karma by Elizabeth A Reeves

Haunting Karma by Elizabeth A Reeves