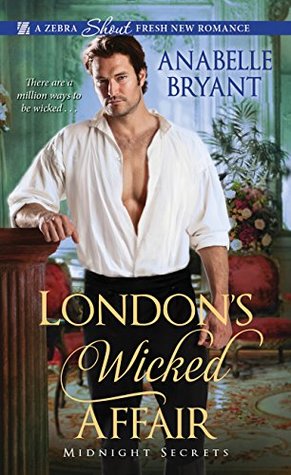 London’s Wicked Affair kicks off Anabelle Bryant’s new Midnight Secrets series with a couple that on the surface shouldn’t work… but they actually do eventually and deliciously so as well.

Amelia is a young woman ahead of her time in many ways – and a headstrong young girl in others.  She is an intriguing mixture of innocence, determination to at least experience some freedoms before being shackled into a boring marriage, and a longing for a man who shuns London and society with a clouded past.  Amelia would just as soon set a gentleman’s lap on fire as she would sit in a corner simpering and sending flirtatious glances across the room.  She saw no reason why she could not have some adventures, speak her opinion freely and enjoy life before settling down into marriage.  After all, gentlemen did so every single day, why was she denied that simply because of her gender.  She’s also realistic in that she knows, even if she hates the fact, that her brother has every right to insist that she marry.  So be it.  But when Lunden arrives in town for business and to fulfill a promise to her brother, Amelia sees no reason why he should not help her have a few adventures before he seals her fate by helping her brother marry her off.

Lunden is a man who is best discovered by the reader as he is slowly revealed, and not by the opinion of another reader.  There is such sadness to the man, and honor as well.  His past defines him, imprisons him in some ways and to watch him come alive again with hope and possibilities through his arrangement with Amelia was truly a delight.  Together they make a formidable, passionate couple.  It will be interesting to me to see how or if Ms Bryant will deal with Matthew in a future story.  To be frank, the man can do little to redeem himself in my eyes.  However, I’ve learned to never close the door to possibilities, especially in the hands and imagination of a skilled storyteller like Anabelle Bryant.

London’s Wicked Affair is an intriguing romance filled with passion, secrets, dangers from the past and the present, as well as some truly enjoyable secondary characters that I want to have their own stories told.  I lost myself in this world and enjoyed every single minute of that adventure.  If you enjoy a really good Regency Romance with believable characters, secrets and a couple that will heal each other eventually, then I’d highly recommend this story for you.  I cannot wait to see what is in store for us in the next story in the Midnight Secrets series.