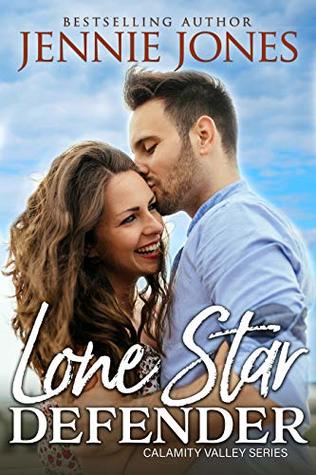 LONE STAR DEFENDER is the third and final story (perhaps, I’ve learned to never say the end to any series) in the Calamity Valley series.  The ladies of the Mackillop family are a unique group with an unusual talent or “gift” and a family curse following them around.

Pepper may be the stubbornest of all of them since she’s working overtime denying that her “gift” or the curse even exist.  She’s so focused on avoiding meeting “the man who will change everything” that she’s blind to what is truly happening right in front of her eyes.  Pepper wants to get into her inherited house, start her new business, and help the town become successful – without relying on the oddity that is the Mackillop family curse.  Trouble is, it’s the curse and her gifts that will help her hometown the most, she simply wants no part of that foolishness.

In LONE STAR DEFENDER, my heart really went out to Jack.  Long ago he did something for the right reasons, it should have been a good thing but because he was prevented from explaining, and because he was really played by another person it all backfired into something really bad that still stands between Jack and Pepper to the present day.  Add to that some assuming (and we all know the other meaning of assume) on his part, some misunderstandings, and Pepper up and leaving town.  Well, all those good intentions, as well as his younger man’s feelings for Pepper, went straight to the regrets pile.

The thing is, I “got” both sides of the history of Pepper and Jack.  Both are/were right, and both are still wrong in their thinking.  Watching them not only deal with their past but try to solve Pepper’s curse predictions was an intriguing journey full of laughter, angst, and waiting for the other shoe to fall.  I enjoyed myself back in Calamity Valley once again.

If you haven’t read both previous books then there are enough bits and pieces along the way that fill you in on the basic details of what you need to know.  I’d still recommend the entire series for they are good, enjoyable adventures that you shouldn’t miss.  If you love a romance with touches of Paranormal, lots of misunderstandings to clear up, a small town that is pinning all of its hopes on two people, and a love that has always been there between Jack and Pepper then you’ll enjoy LONE STAR DEFENDER.