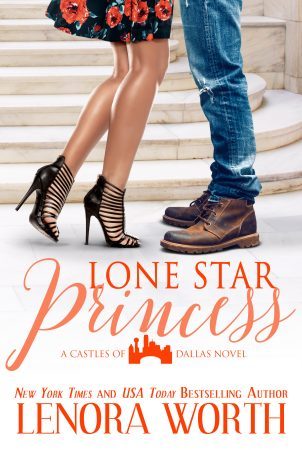 Annabelle Castle is a rebel without a cause…until her stepsister, the head of the glamorous Castle Department store, offers her the chance of a lifetime. Too bad the opportunity to finally play a role in the Castle’s future comes with strings attached—the man who gets under her skin.

Former cop Johnny Darrow is head of security for the Texas-based Castles. He excels at his job and nothing gets to him…except Annabelle. Even as he dragged Annabelle out of many public relations disasters with the paparazzi, he knew there was so much more to her than the headline-grabbing, rich girl. Now that she’s matured and determined to turn over a new leaf, he finds her irresistible. She’s smart, creative, and makes him feel things he hasn’t after a personal tragedy.

When Johnny’s assigned a job as Annabelle’s bodyguard, he must push his feelings aside. Can Johnny keep his focus to protect Annabelle or will his feelings for her put everything at risk

Titles in the Castles of Dallas series include:  Undercover Princess – Lone Star Princess –

I had a good time with Lone Star Princess, although for me it didn’t have the intensity of the first story, Undercover Princess, it certainly did give us a chance to see Annabelle grow up and mature.  I will always say that it’s best to start a series from the beginning for the best understanding and entertainment value – but for this one, I believe you really need the family dynamic and background to really appreciate Lone Star Princess.  Of course, that’s my opinion but it’s worth mentioning… besides the first story is a good one, too.

It was a pleasure watching the changes in Annabelle.  She’s gone from an attention grabbing party girl to a young woman who is given the chance to shine on her own and she takes ownership of that chance her step-sister, Eleanor, has given her.  Johnny has always felt his attraction for this little rebel, he’s certainly gotten her out of enough scrapes over time.  Yet he won’t act on that attraction for a few reasons… reasons that suddenly aren’t that straightforward anymore as Annabelle takes charge of designing and setting up the thought provoking displays for her family’s new store.  This is a different woman, she’s finding her own worth, and she’s keeping out of trouble (for the most part) and maybe it’s time to stop fighting what is happening between them.

If you’re in the mood for a good love story then Lone Star Princess may just fit that bill for you.  Although, again, it helps to have read the first book in this series to understand just how much Annabelle has changed in her own story.

« Stacking the Shelves (#3)
Must Love Babies by Lynnette Austin »