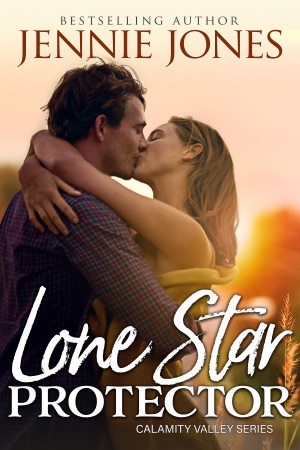 LONE STAR PROTECTOR is full of quirky characters, a great story, a touch of the paranormal in the form of a curse and some abilities, two people who obviously are meant for each other but start out hiding behind half-truths… and so many secondary characters that you’ll fall in love with along the way.  In fact, I suspect that you’ll fall in love with the entire population of this very small town, Surrender (besides the bad guys) in short order.

The cover description pretty much tells you what you need to know to pick this one up… but the best parts are the residents of the town who will fight, squabble and disagree among themselves but will bond together to protect their town, their community in every way possible.  I think I loved the residents as much as I did the main couple in this romance.

Lauren and Mark each have their secret agendas which make the sizzle between them a bit uncomfortable since they seem to be working at cross-purposes.  Watching them work their way through the half-truths, the mistrust and eventually banding together to take down the bad guys was a fun journey.  I enjoyed LONE STAR PROTECTOR and if you love small town romances with a touch of paranormal and some bad guys to thwart then you’ll want to pick this one up real soon.