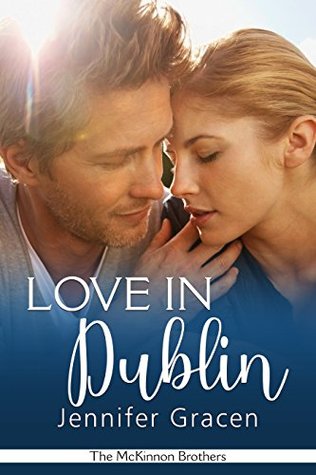 Single father Colin McKinnon has roots and obligations that have kept him firmly in Dublin his entire life. He once planned to explore the world, but he was bound by duty and gave up on his dreams long ago. When he meets free-spirited American travel writer Maggie in a pub, he’s intrigued. She could help him get a taste of what he lost, rattle the chains of his self-imposed isolation. Instantly drawn to her light, beauty, and sense of adventure, Colin can’t stay away.

Maggie Spencer doesn’t just crave the open road, she needs it to survive. After a harrowing accident and life-changing loss, she rebuilt her life by exploring new places on her own. When she accepts a temporary job writing about day tours in Ireland, she falls in love with Dublin and the man she teaches to explore it. Through their daily adventures, they learn opposites do more than just attract—they can also help each other heal.

But can a man with deep roots keep a woman with wings by his side?

Titles in The McKinnon Brothers series include:  All I Want For Christmas – A Doctor’s Love – Marrying His Best Friend – Love In Dublin

Love in Dublin is one of those story that when you flip the final page you let out a very satisfied sigh for a story well told.

After almost two decades of marriage Colin finds himself divorced, children almost grown, and at odds with life.  He’s the kind of man who stays, discovers his duty and does it, who left the wandering dreams of his youth far behind.  Now a chance meeting with an American travel writer has his attention.  He’d love to do what Maggie does, but it’s no longer in him.  What he could see is settling down with Maggie.  But Maggie is still running from grief, from a life that was torn from her at her husband’s death.  Now her wings will not be stilled… unless perhaps by love.

Colin and Maggie both are grieving, wounded souls although for different reasons.  Over the course of three months or so they will strike up a friendship, slowly develop feelings for the other and determinedly begin to help break down walls, or at least put a dent in them.  At first neither sees that what they are trying to fix in the other also needs addressed for themselves.

I know it often doesn’t really sound like it, but to say that a story gave me a very satisfied feeling is truly a high compliment.  It means all the right buttons were pushed, the mix of happy and sad worked for me, and that the ending was everything that I could have hoped for.  Love In Dublin brings two different people together in grief, slowly heals them and then gives them the love of their life to go on into the future with… you cannot ask for much more than that.

I enjoyed myself very much in this story, and I believe any Romance reader would find it charming and touching as well.