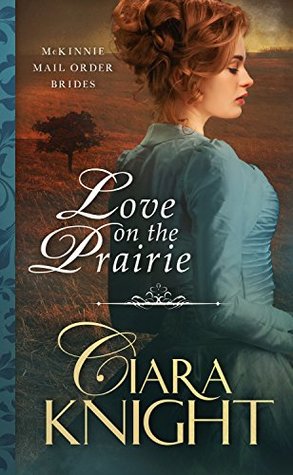 LOVE ON THE PRAIRIE begins the McKinnie Mail Order Brides series with a complex couple who have their hearts set on far, far different goals when Abigail and Owen first meet.  I love this time period, the ongoing march to the West coast and the War Between the States on the East and South – plus some Regency over in England.  It’s a time when a lot is going on in the world, so I will devour romances set within this general time frame.  A story or a series doesn’t have to be “hot off the presses” for me to enjoy or continue – the written word really has no time limit.

Abigail and her six sisters have been through hell on earth as Union soldiers destroyed their home, their possessions, and their future.  War is ugly and leaves behind so many victims.  Now trying to survive in a mostly burned-out home the McKinnie sisters have decisions to make – but eldest sister, Abigail has her own plan, one she’s certain will work out for them all.  The trouble with that plan is that all is not as she expected when she arrived hoping to marry a distant relative and bring her sisters out West to safety for them all.  No, death once again has taken hope from Abigail.  But the land her relative homesteaded remains and that she can work with.  The land – not the man who claims to have worked the land in partnership with her deceased relative.  Certainly not the man who will do everything in his power to send her home as quickly as is humanly possible.

Owen and Abigail’s romance starts off rocky and has an uphill battle before these two will even be working together let alone falling in love.  Life on the prairie is hard, and Owen knows the price that can be expected is often someone’s life.  He has no idea of what drives Abigail, at first, aside from her stubbornness but she is slowly wearing him down as she continues to work the land, and perhaps work some magic on his heart as well.  There are dangers to be faced, pride to set aside, and trust to be given before they can have a future together.  A rocky road indeed, but well worth the journey.

I enjoyed LOVE ON THE PRAIRIE.  It’s a clean, engaging romance of two stubborn people who finally realize that they don’t have to fight for them both to win.  There is, of course, a villain – and a nasty one at that – to be dealt with, but also good people who are trying to make a home.  This story brings home both sides of the story as in order for homesteads to be built and land worked, the original people, the Indians who live there are pushed from their homes.  That is a reality we often overlook in modern times.  I also enjoyed that glimpse of both sides of the history that often romance stories bypass.  If you enjoy Western Historical Romance then this is a series you may want to look into.

I own a Kindle edition of Love on the Prairie.