Love Walks In by Samantha Chase 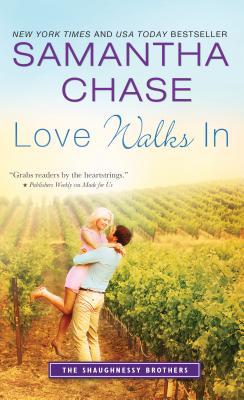 He lives by a schedule. Aubrey Burke is on the run from an about-to-be-disastrous mistake when resort owner Hugh Shaughnessy catches her climbing through his office window. Until Aubrey tumbled into his life, Hugh had relied on work and discipline to safeguard a heart damaged by family tragedy. Now his careful world will never be the same.

She lives for the moment. Hugh’s approach to life and love is the opposite of Aubrey’s, but she soon finds herself falling hard for the handsome hotel mogul. There’s a darker reason behind her “live for today” attitude than Hugh could possibly know, but for the first time Aubrey dares to hope this man’s love might make it worth taking a chance on the future.

Read on for my thoughts on Love Walks In.  No true spoilers, promise.

Love Walks In is the second story in the The Shaughnessy Brothers series.  This time around we’ll be getting to know Hugh a bit better.  A stickler for routine and things that happen on his own schedule, Hugh is now a much different man from his younger years.  A bit of a rebel in his youth, he still blames himself for actions he took that changed his family’s life forever.  He wasn’t truly to blame, but guilt is never logical but purely emotional – and when you truly believe your actions brought about the death of your mother, well there is no logic in the world that can change that opinion until you see the truth for yourself.

Aubrey is the total opposite of Hugh, she lives for the moment and in the moment.  Perhaps she takes this life style to extremes, but with a father who is as controlling as hers is, a woman takes her enjoyment of life as it comes and doesn’t plan too far into the future.  The situation she finds herself in when she first meets Hugh is pretty much normal for Aubrey.  Accepting a spur of the moment marriage proposal seemed fun and romantic, until she learned that her father was behind the whole thing.  Now she’s about to do a disappearing act, except her luggage that she tossed out the window has been confiscated and it’s when she tried to retrieve it that she first meets Hugh… as she’s crawling into his office window.

And the charm, the fun and the zaniness continues as two complete opposites slowly fall in love and learn that life happens, so just enjoy it.

I enjoyed Love Walks In very much.  It’s a heartfelt story of two people who need each other, even if at first they’d deny that, especially Hugh.  There are lessons to be learned, past hurts to mend and a love worth fighting for.  A completely enjoyable romance, one that I would not hesitate to recommend to anyone who simply enjoys a solid love story with a few quirks tossed in for fun.

*I received an e-ARC of Love Walks In from the publisher and NetGalley in exchange for an honest review. That does not change what I think of this novel.*