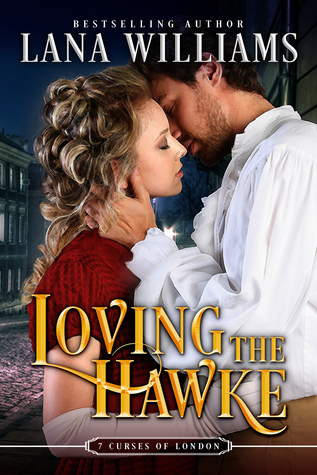 LOVING THE HAWKE is an interesting, at times intriguing look at London during the Victorian/Regency timeframe – the real London, the one where the average person lived, tried to survive, and often became lost in the shuffle of an indifferent society to those who are not of the ton.

Lettie and Nathaniel are both searching for a purpose in life.  Each has their personal issues to be dealt with, some easier than others to make real changes in.  While Lettie tries to save the impoverished young girls of London’s streets from truly evil people who would harm and use them for their own purposes, Nathaniel has a similar goal, one he will take just about any risk to accomplish.  Watching this couple connect in their fight for these young girls, and begin to fall for each other along the way was an enjoyable journey.  There is angst here for Nathaniel and Lettie have spent their lives under the thumb and control of others.  Together they work finally finding someone who understands them, sees their worth and can love them without reservation.  I liked them individually and as a couple.

We’ll meet some truly nasty people as well as those who will perhaps be the hero or heroine of their own story in this series.  It’s not often that we get a look at the life of any character outside of the ton and it was an eyeopening experience to see the seedier, more dangerous side of London during this time.  Of course, we know it’s there but it’s not often brought right into the story for more than a moment.  I enjoyed myself and will definitely be following the series in 2020.

This title has been on my Kindle for some time now and the Winter COYER 2019 seemed like the perfect time to load this one up and learn more of a new-to-me author’s work.  At the moment, this entire series is in Kindle Unlimited, yet when I picked it up LOVING THE HAWKE was a free series starter deal.