Mac on a Hot Tin Roof by Melinda Metz 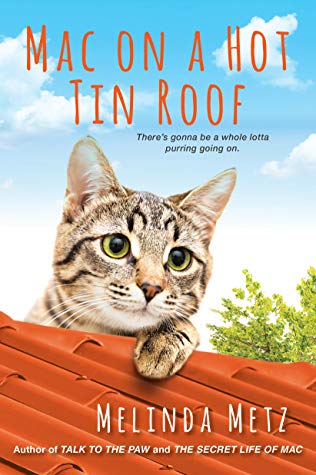 KITTENS CABOODLE
As a tabby cat with criminal tendencies, MacGyver is always a whisker away from trouble. But when he stumbles upon a litter of five motherless kittens, he really has his paws full. It’s clear Mac has to take care of the cuddly little furballs, at least until he finds them each a human. That’s not going to be easy though. Not when Mac’s the prime suspect in a series of thefts at Storybook Court–and his loving but concerned owners, Jamie and David, have put him under house arrest. As if that could stop a clever cat like Mac.

HUMANS CANOODLE
With five hungry mouths to feed–and two local detectives on his tail–MacGyver has his work clawed out for him. He’s determined to sniff out the real thief. But when he gets a whiff of romance in the air, he can’t resist a little matchmaking, too. One of the detectives seems awfully fond of the aspiring actress who moved into the neighborhood. And his partner looks like she could use a hug, too. With a little help from those adorable kittens, Mac is sure that love will save the day. Because when it comes to stealing hearts, this cat’s out of the bag.

MAC ON A HOT TIN ROOF brings us another adventure of a definite kleptomaniac cat by the name of MacGyver, or affectionally, exasperatedly also known as Mac.  This time around, aside from tracking down another thief in the neighborhood and matchmaking his little kitty heart out, Mac has found a litter of abandoned, orphaned kittens in rough shape and now adds foster cat rescuer to his long list of abilities.

This unique cat has his work cut out for him as he evades capture by detectives who think he’s up to his old tricks (he’s not) and finding the perfect home for his little charges – and why not mix some matchmaking in with the search for the purr-fect home as well.

I had fun with Mac, Jamie, and David once again.  MAC ON A HOT TIN ROOF is a charming Cozy Mystery that will please any cat lover, for we all know that cats are unique in their personalities, and is simply an overall good read.  This story could stand on its own, but the rest of the earlier books are charming as well so feel free to indulge yourself from the very beginning to see how Mac got his start.

Thank Goodness This Week Is A Wrap! #3

Thank Goodness This Week Is A Wrap! #3