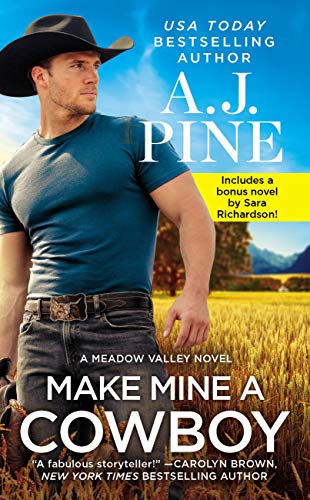 It’s rather astounding what having the correct information about a medical issue can do to change a life or a lifestyle in the case of Ben Callahan.  In ‘Make Mine A Cowboy‘, the second title in the ‘Meadow Valley Ranch‘ series, we’ll meet Ben and the woman he’d had a sizzling week with when Charlotte North was in town for a brief visit.  Neither was looking for long-term so they left each other without too many regrets of what might have been.  Now Charlotte is back in this small town to tend to her grandmother as she heals from a fall resulting in some broken bones for at least the next few months.  She’s left her medical practice in New York in good hands and fully intends to return when her gram is recovered.

In the time that Charlotte was back in New York, Ben had received news that changed his outlook on his life and what his future could hold – if he could convince the right woman who got away that he wasn’t the playboy she first encountered.  That’s going to take some convincing – and maybe the help of a loving, meddling, matchmaking grandmother that results in Charlotte needing a temporary fake boyfriend.  It’s up to Ben to make that temporary situation into a permanent one.

I found the full gambit of emotions in ‘Make Mine A Cowboy‘.  The sizzling chemistry between Charlotte and Ben is obvious, and there were plenty of laughs, a few snort-giggles, some frustration, and tears, many tears.  This story is realistic in so many small ways that you’ll feel like you’re going through the good times and the bad times with this couple.  I liked them both, adored Charlotte’s gram, and the secondary characters make this town come to life for me.  I especially liked the unusual spin on the happy ever after ending… you’ll see what I mean.  I had fun, and that’s the whole point.

If you’re in the mood for a really good romance that’s full of interesting people facing real-life situations, some steamy moments, and a love to last a lifetime then ‘Make Mine A Cowboy‘ is a perfect fit for you.

*I received an e-ARC of this novel from the publisher, Forever (Grand Central Publishing) via NetGalley. That does not change what I think of this story. It is my choice to leave a review giving my personal opinion about this book.*

Available in paperback or your favorite e-reader, mine is the Kindle.