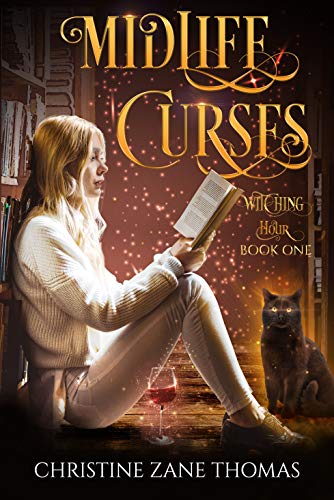 Midlife Curses kicks off the Witching Hour series with an interesting tale of the supernatural, definitely life changes, and… murder.  Although this series bills itself as part of the newish genre of Paranormal Women’s Fiction, there are touches of Paranormal Cozy Mysteries as well so readers of either genre would feel right at home.

There is world-building in Midlife Curses, I expect that, but there is also different lore in that building.  And adding that lore into what I consider Paranormal took a bit of getting used to.  Most of what you’d want to know is in the Cover Description.  Constance has no idea that the paranormal world exists so she’s in for more than a few surprises when she arrives at her grandmother’s home.  To learn that she comes from a long line of witches is one thing to accept but to be told that she’ll be coming into her own powers in just a few days seems a bit over the top.  She’ll humor her grandmother right up until things happen that just have no other explanation.

Soon Constance is knee-deep in a town full of various paranormal creatures, more witches than you can shake a broom at, and a most unusual familiar as her new companion.  The sheriff is a werewolf with pups or daughters who definitely deserves a second or third glance.  This widower is sending off mixed signals, but Constance is too caught up in this new world to worry about him.  When she discovers the dead body of her boss, well, things start getting very interesting, and dangerous, very quickly.  Now it’s a race to discover a murderer before more dead bodies pile up.

I enjoyed Midlife Curses, yet I remain divided on it in many ways.  I felt… awkward… in this world, there is no other way to describe it.  Perhaps that’s because a different set of rules seemed to be used here as to what makes up the supernatural world.  Each author creates their own world, I totally understand that.  But I didn’t like feeling off-kilter with some basics.  In many ways, this story felt more like a Cozy Mystery than a woman coming into her own power of the Paranormal Women’s Fiction genre.  I liked it, don’t misunderstand, I need one more story to tell if I’ll follow the series to the end so I’ll be downloading Never Been Hexed shortly.  So frankly, if you enjoy either Paranormal Women’s Fiction or Paranormal Cozy Mysteries then I’d definitely say give this story a try.  It wasn’t instant love for me, more like “let’s try a second date” and that’s okay, too.