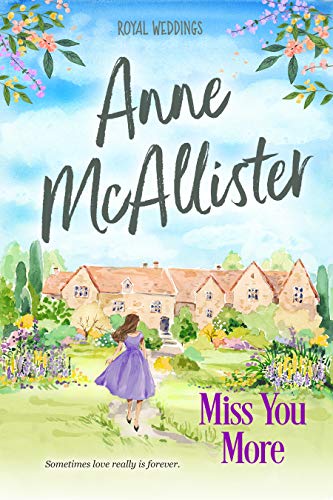 **Once upon a time, Miss You More was known as The Best Man’s Bride in the Royal Wedding Invitation multi-author series from Tule Publishing.  Back in 2017-18, I was fortunate to receive all four books as ARCs and what you’ll find here is that original review with a few necessary alterations due to title changes and such.  No matter when it was reissued, renamed with a lovely new cover – Jack and Celina’s romance is touching, emotional… and still well worth your time.**

Jack and Celina were once married but misunderstandings and the hectic life of a rock star pulled them apart.  It’s been two years since the divorce was final and now they’ll be seeing each other for the first time in a very long time.  Their love for each other has never really died, something Jack has long known and Celie is beginning to realize.  Is it possible to get beyond everything that separated them once before to even dream of a second chance at happiness?  That’s something Jack is determined to find out for he is still very much in love with his Celie and he suspects that she still loves him as well.  Perhaps each being a bit older and hopefully wiser, they can mend the problems, clear up the misunderstandings, and get that second chance at happiness together.

Miss You More is an, at times, bittersweet look at what makes love go wrong – and the lengths one man in love will go to fix it.  Jack and Celina were a believable couple facing some very real problems.  No, I don’t know any rock stars but I do know people who are overwhelmed, I get that misunderstandings are going to happen and will cause damage if they aren’t cleared up.  I do know that if two people won’t talk to each other they’ll never resolve anything.  And these are things that Jack and Celina had to discover for themselves over different spans of time.  Watching their second chance at happiness open up in front of them was an emotional, tender reading experience.

I’ve enjoyed the Royal Weddings series very much.  All the stories are amazing with likable, realistic people facing unusual circumstances.  If you haven’t picked any of these stories up yet I’d strongly recommend this series to any Romance reader.