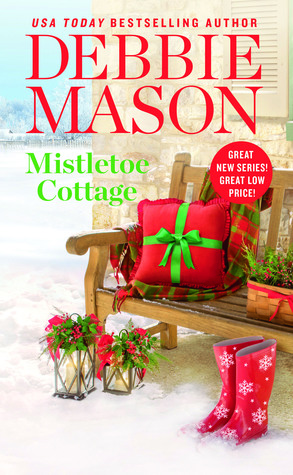 Sophie DiRossi loved growing up in Harmony Harbor. But after fleeing in disgrace many years ago, it is the last place she wants to be. Left homeless by a fire, she’s forced to go back to the small coastal town that harbors a million secrets, including her own. Sophie sees this secret reflected every day in her daughter’s blue eyes-and she must keep it hidden from the only man she has ever loved.

Sophie’s return is a shock for everyone . . . especially Liam Gallagher. The firefighter had some serious feelings for Sophie-and seeing her again sparks a desire so fierce it takes his breath away. Now Liam will do whatever it takes to show Sophie that they deserve a second chance at love, even if everything they’ve concealed threatens to keep them apart. In this special town at this special time of the year, Sophie and Liam can only hope for a little holiday magic…

Titles in this series include:  Mistletoe Cottage, Starlight Bridge (Feb. 2017)

Read on for my thoughts on Mistletoe Cottage.  No true spoilers, promise.

There’s something about small towns that draws me in.  Maybe since I grew up in a very small town I’m going home in a way through my reading material.  I don’t know, but I’m certainly looking forward to getting to know the folks of this new Debbie Mason series, Harmony Harbor.  A place full of gossip and feuds, friends and enemies, family and neighbors who all know far too much about your personal life.  And secrets, lots of secrets to be unraveled over time.

Sophie is returning to Harmony Harbor with her young daughter, Mia.  If it seems like she’s got the weight of the world on her shoulders, well, that’s because it certainly feels that way right now.  Life hasn’t been easy.  Right now Sophie and Mia are recovering from a fire that left them homeless and Mia traumatized by those events.  Coming home was the right thing, the only thing to do.  They could heal here, and she could start over again.  If it meant that she’d run into the man who held her heart in his hands, well so be it.  She was strong enough to face Liam now, just not strong enough to tell her secrets.

Liam has cared for Sophie for years now.  Having her home again is a second chance in his mind.  The chance to make things right with her, to show her that he is the man she can depend on for everything.  If she’d give them that chance.  He already loved her daughter, and right now Mia was responding to him so he’d build on that… for now.  But eventually he and Sophie would be together – there was no secret that either held that would stop that from coming true.

Mistletoe Cottage is a delightful Christmas treasure that opens up a new series.  There are secrets in this town, lots of them and sooner or later they’ll all be out in the open.  The secondary characters provide for an interesting bunch of townsfolk and family.  There’s even a touch of the magical around.  This first story was enough to grab my curiosity and I’m definitely looking forward to Starlight Bridge coming out in February of 2017.

Liam and Sophie are a couple that was meant to be.  They have some obstacles to get over but the core of their love is strong in spite of secrets that need to be revealed.  I enjoyed them very much, both individually and as a couple.  The truth is that it isn’t always easy to come home again, but the old saying of home is where the heart is holds very true for Liam and Sophie.  I enjoyed their story very much… and if you love small town romances, I’m betting you will too.