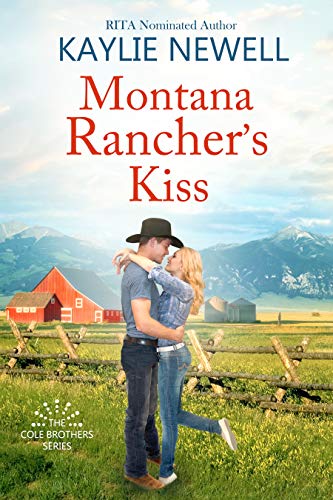 Montana Rancher’s Kiss continues The Cole Brothers series with Daisy and Brooks, a couple with a painful shared past who get what doesn’t come along all that often… a second chance to make amends, a chance to get love right this time but it won’t be easy, and there’s still lingering pain to be dealt with before this couple finds their happy ending.

There was a time when Daisy couldn’t get out of Marietta fast enough, and she left broken hearts as well as complicated family relationships behind.  Now, after a divorce and the realization that no one lives forever Daisy has returned home determined to face her past, try to put things right again… she just didn’t expect to run into Brooks so soon or to discover that he’s one of her new bosses at Diamond in the Rough.

Brooks has loved one woman in his life, a woman who married his one time best friend leaving him and the town they grew up in far behind.  Sure, Brooks has moved on, he’s got a ranch to work, friends to depend on but he won’t risk his heart again, not when it still belongs to Daisy.  Imagine his surprise when he opens a door to discover his lost love standing there ready to begin work as the temporary cook for the dude ranch while their cook recuperates. Dreams or maybe nightmares do come true – and neither one is ready to face the one they loved beyond anything else so soon or without warning.  But reality bites and this couple will have to work together not only on the ranch but perhaps at putting the pieces of what they were to each other back together again – not the same, but more mature, deeper, and with mistakes acknowledged from their past.

I’ve always loved returning to Marietta, Montana – but the reality is that not everyone loves small-town life.  Daisy made a choice to leave Marietta, her family, and Brooks far behind.  It wasn’t the best choice it turns out but she’s owning it and her part in hurting others with that decision and more.  I understood Daisy, felt her emotional responses to coming home, helping her sister, and facing Brooks again.  None of that was easy, but she’s determined to face her past and go beyond it.

Brooks has strong abandonment issues, there is no hiding that and it’s part of why he lost Daisy in the first place.  Yet.  I could feel Brooks’ love for Daisy, even after all this time, and his confusion, his hesitancy to give his heart again because it wasn’t treated carefully the first time they were together.  Brooks is a strong man, a compelling character and still, I adored that I could feel the love for this woman flowing from him, even if he wasn’t totally comfortable with that fact.  He expects people to leave him but he has to learn to trust in love and in the woman he loves.

Dealing with the past isn’t always easy or comfortable, yet this couple faced it, acknowledged their parts in it, and moved beyond to enjoy a love that never really died but was certainly bruised along the way.  Montana Rancher’s Kiss is an emotional story but there is laughter mixed in with the tears, hope to replace past pains, and the belief that second chances don’t happen often so don’t waste this one.  If that’s your kind of romance, then this story, this series would be perfect for you.