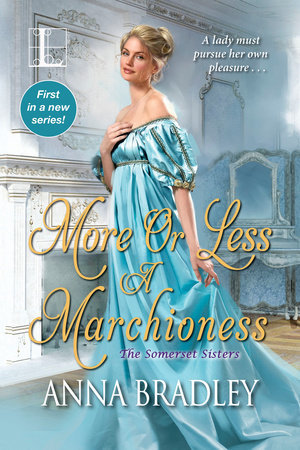 For the sake of propriety, and her younger sisters’ reputations, Iris Somerset has kept her rebellious streak locked away. But though she receives a proposal from Phineas Knight, Lord of Huntington, Iris can’t marry a man she knows isn’t truly enamored with her. In fact, Iris no longer wants to be chosen—she wants to choose. Under the clandestine tutelage of “wicked widow” Lady Annabel Tallant, she’ll learn how to steer her own marriage prospects—and discover her secret appetites.

What kind of debutante refuses a marquess? Finn is surprised, a little chastened—and thoroughly intrigued. This new, independent version of Iris is far more alluring than the polished socialite she used to be. Finn believed he needed a safe, quiet wife to curb his wilder impulses. But the more Iris surprises him, the more impossible it becomes to resist their deepest desires

More or Less a Marchioness is a delightful tale of two people who are unwilling, or perhaps a bit afraid to show their true selves to the Society in which they live.  Iris is a free spirited young woman who must, in her mind, tone down her rebellious streak in order to pave the way for her sisters to make good matches.  And it works rather well as she finds herself engaged to the stuffy and proper Lord of Huntington.  She really has no idea if they’ll match for she’s barely said a word to her betrothed, nor he to her.  He seems to want a biddable, proper wife and Iris would have tried to do that for the sake of her sisters if only she hadn’t overheard a conversation that set off that impetuous nature of hers and ended the engagement.  She truly loved her sisters but a life of boredom with a man who has no desire for her at all is simply too much to ask of her.

Due to a scandal in his family’s past Finn has hidden and kept a tight rein on his wilder side, the side that would love to do so much more with his life than the safe, proper, boring persona he’s given himself.  Why the child must pay for the parent’s sin is beyond him, but it’s also the way of Society, for the most part.  In order to keep that churning side of himself quiet Finn believes that only a proper, boring wife will do.  It truly didn’t matter to him which of the newest crop of debutantes in their First Season agreed to his marriage proposal, after all the young girl would be marrying a marquess, that alone should be enough of a prize.  What he never expected was to find that his biddable choice would turn on him and end their engagement.  Too bad that Iris became even more enticing to his bolder side once she let her true self be shown… or was it really.  Finn found himself wanting very much to win this lady’s heart in spite of all he’s taught himself to hide.  Now comes the chase, and the determination to win the bride that is right for his honest, true self.

If you’ve read any of Anna Bradley’s other series, then you’ll recognize some old friends.  If not, then you have an excellent back list of stories to be entertained with in your future.  I enjoyed More or Less a Marchionessvery much.  Watching Iris and Finn try to fit into molds that obviously were not natural to either of them was rather painful.  So when Iris broke free, then the fun began.  Their’s is not an easy romance, there is danger, a nasty villain, hurt feelings and such stubbornness to overcome.  But Finn and Iris work so well together that is was a fun journey to see then get exactly what they deserved at the ending… each other in a happy ever after life.  I’m already looking forward to More or Less a Countess to continue the adventures of The Somerset Sisters.  I would not hesitate to recommend this story to any Regency or Historical Romance reader who enjoys a lively plot, a touch of danger, secondary characters to enjoy almost as much as the main couple, and a touching love story.