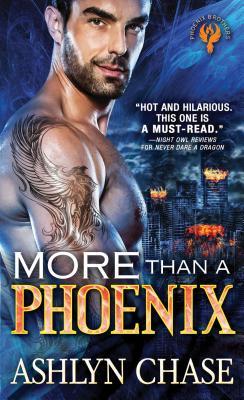 This time around Ashlyn Chase is giving us two Phoenix brothers and their lively, adorable mates in one story that flows together very well… and all the characters are needed to solve this nasty problem.  You “could” read this one on its own, but I feel you’ll get a better overall view if you’ve at least read Hooked On A Phoenix – but I’m a firm believer of reading series in order to get the most from the stories.

Dante and his mate, Mallory who is turning into the cutest little monkey under stress and sees dead people…. but that’s not possible, right?  So she believes herself totally crazy.  Noah and his perfectly witchy doctor mate Kizzy who gives new meaning to the word magic… and Noah the perfect chances to say with a straight face “My witch doctor”.  *eye roll at men and their humor*  Two brothers, firefighters, phoenix shifters and their classy, sassy, completely perfect for them mates give this story a lot of laughter, sizzle and perfect one-liners.  And we’ll run into other well known and loved faces as well as very nasty villains.  I will admit that although I followed along without troubles, the story is a bit crowded and is told in multiple points of view, so until you have the couples together in your mind there might be some confusion.

I have a blast with the large, boisterous Fierro family every single time we meet, and More Than A Phoenix was no exception.  There are secrets to be revealed, mated to charm, a mystery to solve, lots of family and friends interaction and one very nasty evil group to take down.  That’s a lot of action, sizzle and danger packed into one story… and I loved every minute spent in this world once again.  If you love anything Paranormal, hot guys, sassy ladies and a really good story then you’ll enjoy this story or the connecting ones as well.