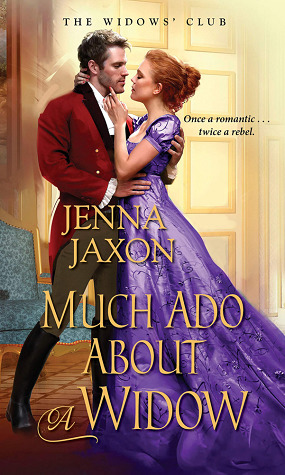 Lady Georgina Kirkpatrick defied her family, jilted her fiancé, and married the man she loved. But when her husband died at Waterloo, she was delivered right back into her father’s power…

Victory is sweet—but England’s triumph was Georgie’s rout. Now that she’s widowed, the loathsome marriage her father first arranged has simply been renegotiated. With neither money nor rights, and nowhere to flee, all she can do is cherish her last weeks of freedom… Until a band of ruffians overtake her carriage and kidnap her. When she escapes in seaside Brighton and encounters her brother’s rather wild friend, Lord St. Just—whom she suspects aspires to be a pirate—she’s prepared to entertain more of his adventurous suggestions than usual…

St. Just knows his mind and his duty, and he loves a challenge. Helping a fair lady make her farewells to hoodlums suits his talents well. Within the hour he has Georgie, her lady’s maid—and her little dog, too—sailing for his castle in Cornwall.

Meanwhile, the lady’s entire family, her kidnappers, and her scheming intended are in pursuit. But as he and the indomitable Georgie grow closer, he begins to suspect that together they will prove a match for them all…

Titles in The Widow’s Club series include:  To Woo A Wicked Widow – Wedding the Widow – What A Widow Wants – Much Ado About A Widow –

I believe there are Historical/Regency Romance readers who will enjoy Much Ado About A Widow – unfortunately, I simply liked parts of it as I found it to be a basically good book with far too many parts that simply frustrated me to no end.  Georgie is now widowed but she won’t come into an inheritance in time to save her from her evil father’s scheme in insisting that if she wants back into the family fold then she’ll marry the man she jilted in order to marry for love.  While returning to her father she, her maid and her dog are attacked and kidnapped.  Rob St. Just will come to her rescue and sweep them all away to his estate where she should be protected… but trouble and determined men follow.

This story feels overtaken by secondary characters and their voices often added to the chaos instead of making things clearer.  I liked Rob, have mixed feelings about Georgie’s brother, Jemmy and loathed the betrothed and her father.  Georgie… well, I think I’ll let you discover her for yourself.  She had her moments for me but I could not connect – that may be just me so you’ll discover Georgie on your own.  Much Ado About A Widow is a good book, it simply wasn’t a book that was for me.  You should make up your own mind on this story for there is an audience that will love Rob and Georgie and their unusual, crazy romance.

« The Way Back to You by Sharon Sala
Honoring Her Heart by Amelia C. Adams »