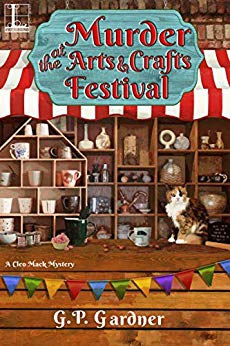 It’s late March in Fairhope, Alabama, and artists from around the country are flocking to the bayside town’s Arts & Crafts Festival. The annual tradition has something for everyone, only this year, the main attraction is murder . . .

Cleo Mack’s life has been a whirlwind since she inadvertently became the executive director of Harbor Village, a retirement community bustling with energetic seniors. Juggling apartment sales, quirky residents, and a fast-moving romance is tricky business. But on-the-job stress develops a new meaning when Twinkle Thaw, a portrait artist known to ruffle a few feathers, arrives unannounced for the weekend’s festival and drops dead hours later—mysteriously poisoned . . .

Twinkle’s bizarre death doesn’t seem like an accident. Not with a sketchy newcomer slinking around town and a gallery of suspects who may have wanted her out of the picture for good. As Cleo brushes with the truth, she soon finds that solving the crime could mean connecting the dots between a decades-old art heist and an unpredictable killer who refuses to color inside the lines.

I stepped into the Cleo Mack Mystery world at the third title, and usually, this would have me in a panic but I was not the least bit lost on the background of this series and fell into the story so very easily.  I always appreciate when there is just enough in either the narrative or the dialogue to bring me up to speed on what I really need to know about previous stories.  MURDER AT THE ARTS AND CRAFTS FESTIVAL is a charming, fast-paced, grab me by the hand and never let go until the end type of story with enough twists, turns and red herrings to satisfy any Cozy Mystery reader.  I will definitely be going back for the earlier titles to catch all the nuances of this series from the start.

I liked Cleo, adored her sorta boyfriend Riley (hope to see that develop over time), and loved the quirky residents of both the apartment complex and this town in general.  I love puzzles, but I don’t have to figure out whodunit before the reveal – the fun part of Cozy Mysteries for me is the adventure in getting there.  But this one I definitely didn’t see coming, and I love when authors surprise me like this.  If you love Cozy Mysteries, a really good story, and characters who come to life on the page then you’ll want to pick up MURDER AT THE ARTS AND CRAFTS FESTIVAL soon.  I completely enjoyed myself in this world and would not hesitate to recommend this one – now to go pick up the previous titles.