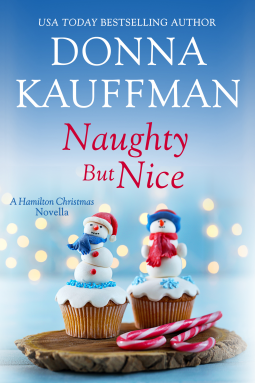 ʼTis the season for sweet surprises . . .

Businessman Griffin’s never believed in luck . . . until sassy-sweet small-town baker Melody turns his world around. Except there’s a catch:

There’s no way he’ll be able to build his empire and hold on to her. This new love could destroy all his dreams—or make this Christmas better than he ever imagined possible . . .

Melody and Griffin are on the total opposite sides in the battle for changes planned for Melody’s home town.  She thinks life in this small town is perfect as it is and is completely against the changes Griffin wants to bring in.  Griffin has only the best interests of the town at heart, even if it does appear that he’s tearing down the past to build the future… on the surface, at least.

Naughty but Nice is a quick romance with a strong attraction between two people who view life in a small town very differently.  Neither is totally right nor wrong, so the challenge becomes finding  middle ground to allow the attraction between them to come to full life.  I liked this one, especially as it wraps up the mystery that has flowed through this entire series.  It’s short enough that I don’t want to say much… except that I enjoyed Melody and Griffin’s romance, and sparks certainly do fly between these two.