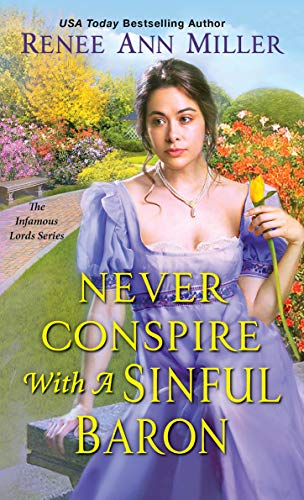 When a duke more interested in fox hunting and sports than womanizing comes to town, Nina thinks him the perfect catch. Sadly, he doesn’t seem to notice her. But Lord Elliot Haverford, Baron Ralston, a notorious flirt, has a proposition: he’ll not only pretend to vie for her hand, hoping to draw forth the duke’s competitive nature, he’ll also give Nina lessons in seduction.

An aristocrat in possession of two dilapidated properties must be in want of a fortune. Elliot’s proposition is a subterfuge, for he hopes to capture Nina’s hand—and her dowry—by slyly seducing her himself. Though he feels guilty over his deception, their interludes, filled with dancing, flirtation, and increasingly heated kisses, are impossible to regret… until he realizes he has unwittingly placed Nina in grave danger.

What’s a scoundrel in love to do, except finally risk his heart for real?

‘Never Conspire With A Sinful Baron’, the fourth title in ‘The Infamous Lords’ series caught my attention, my interest, and definitely my laughter early on and never let go until the ending.  Although I have not yet read the earlier titles (which is unusual and will be remedied soon) I had no trouble falling into the rhythm of this romance.  So, with that background, I’d say you “could” read Elliot and Nina’s story on its own.

Most of what you’d want to know before picking this one up can be found in the Cover Description.  What you won’t find there is the emotion of the story.  A young lady who was wronged (even if the polite society of the time turns a blind eye) and will never allow herself to be used again.  And a man who has no belief in this thing called true love but does know that he needs Nina’s dowry to repair his newly inherited estates.  It’s a risk he’s willing to take to pretend to teach Nina what she needs to know to land her ideal husband, all the while drawing her closer into his own web.  The funny thing about webs – often the wrong person gets caught up in them.

I enjoyed ‘Never Conspire With A Sinful Baron’ very much.  The writing is smooth, the world easily fell in place, the characters are true to their natures (even the vile ones).  I loved the secondary characters I met, several definitely kept me in laughter whenever they were around.  Nina and Elliot’s journey to falling in love is hampered only by the danger in Elliot’s life – and perhaps that danger brought to the forefront just how precious loving and protecting someone can be.  While their road to a happy ending wasn’t without potholes, there was nothing that could stop two people who are truly right for each other.  If you love a really good Historical Romance then you’d feel right at home with this one.

Available in paperback, audio, and your favorite e-reader (mine is the Kindle)