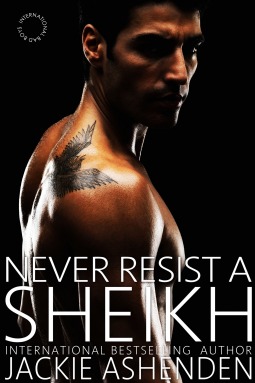 Felicity Cartwright is ambitious, fierce, and has everything to prove. But when she arrives in Al-Harah on business for her new tech start-up, she’s mistaken for the future queen and taken against her will.

Zakir ibn Rashiq Al-Nazari, ruling sheikh of Al-Shakhra, needs of a wife. Inheriting the throne after tragedy strikes his family, his government and people demand heirs, and hope for the future…

Once Zakir chooses Felicity as his bride prize, she is told she cannot resist… and when the unexpected chemistry burns between her and the sheikh, she learns she doesn’t want to. Will Felicity, this western stranger who has an inexplicable hold over Zakir, be just what he and his country needs to heal?

Read on for my thoughts on Never Resist A Sheikh.  No true spoilers, promise.

Felicity and Zakir’s romance is fast paced, and passion filled.  Zakir has lead a raid into his neighboring country to kidnap Princess Safira.  Yes, she is to be wed to the Sheikh of Al-Harrah but since it is rumored she has refused him, by tradition, Zakir can swoop in and grab the Princess as his bride prize thereby angering one Sheikh and his kingdom and winning the favor of his people by bring them a Queen worthy of reigning at his side.  The fact that the Princess may not want to marry him either is totally beside the point.

When Felicity made the trip to Al-Harrah to close a deal that would bring the country fast, inexpensive and reliable internet service – in a manner which she had invented, she believed this was the deal to take her company over the top.  At twenty-four years of age, a genius, and the head of her own company, Felicity was at the top of her game.  Admittedly she might have been a bit distracted on the ride to the palace, yet there was no mistaking the danger when armed men began striding toward her trapped vehicle and a powerful, handsome man entered with the intention of taking her away with him.

Unfortunately for Zakir, this fiery red-head was definitely not Princess Safira.  She would be better guarded from now on and his one chance has slipped through his fingers.  However, one bride prize is the same as another and this young woman would become his Queen in short order.  He was the Sheikh and his word was law… trouble is no one explained that to Felicity.

I enjoyed Never Resist A Sheikh very much.  It is a love story ripe with the sights, scents and traditions of an ancient kingdom – one with very little to do with the modern world.  Felicity was a delightful heroine.  Stubborn even when scared, brave when she should have backed down and willing to settle for nothing less than Zakir’s heart, Felicity was a worthy opponent for our Sheikh.  Zakir is handsome, sexy, arrogant with an inner strength that most men would envy.  He has come to reign after the bloodbath that his brother and his new bride died in.  He has no illusions about love, considers it nonexistent for him.  His country needs a Queen, one day he will need an heir – it’s simple.  What he needs he takes without thought to the consequences for anyone – including himself.  It was a delight to watch this strong man fall to the power of a woman’s love.

I would highly recommend Never Resist A Sheikh for any romance reader.  It is a passionate glimpse into a world culture that most Westerners will never see.  A hero and heroine who truly deserve each other, it just might take them a little time to realize that.  Indulge and enjoy.

*I received an e-ARC of Never Resist A Sheikh from the publisher and NetGalley in exchange for an honest review. That does not change what I think of this novel.*

« One Night with the Playboy by Katherine Garbera
If You Coulda Written It Better Then Go Do It! »