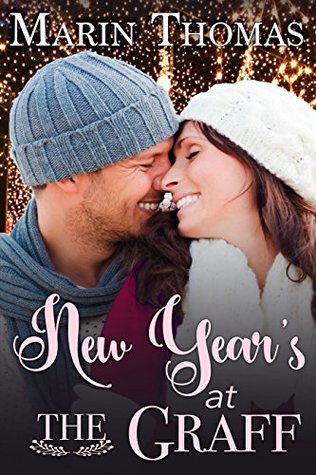 What an incredible, touching journey New Year’s at The Graff was for Ava and Lucas, as well as the people their lives touched.  This is one of those stories that I’d love to sit back and really talk about for it touches deeply into the heart, but I cannot for to do that would spoil this adventure for you.  All I can do is tell you that this is a story that will give you all the “feel goods” you’ll ever want from a Romance, and hope that you’ll want to discover this story for yourself.  This one is a keeper, and I can see myself pulling this one up on my Kindle for many holiday seasons to come.

Lucas has made the trip to Marietta, Montana for an enforced vacation as well as to follow his mother’s last wishes to return and thank many people of this small town for the kindness that was shown to them when life was difficult and very hard for them both.  Ava is a widow, a single mom and in some ways watches over her eccentric mother-in-law.  She’s worked hard for her education, her job at the Graff pays the bills but she’s working toward her dream of opening a co-op that will help single mothers have the chance for an education that will give them the financial freedom that a college education can help with.  There are never guarantees in life, but with an education so many doors can open for these woman, and Ava’s dream is just about to be realized if things work as she hopes they will.  She hadn’t expected the attraction to this handsome man who could have such an impact on her dreams.  She might hope for a future with Lucas, but she’s realistic enough to know that he’s here in town temporarily and dreaming of his staying with her are probably unreasonable.  But it’s hard to not dream when that perfect for you man is right there in front of you.

The true star of New Year’s at The Graff is Ava’s little daughter, Sophie.  She steals your heart and every scene she’s in.  Frankly, it wouldn’t be the same story, with the same impact without one little precious princess Sophie.  Lucas’ interactions with Sophie from the very start will put a smile on your face and a warm tingling feeling in your heart.  Lucas has a lot to learn on this trip to his and his mother’s past.  Some things will be rather surprising, others will reinforce what he already knew of her.  I was surprised to end up liking one secondary character more than I expected to at first.  People can change, I think that’s something we often forget.

I enjoyed every moment of this story, and was rather sad to see it come to an end – even though the ending was pretty perfect for me.  I would not hesitate to highly recommend this story or the entire series to any Romance reader who loves realistic, heartwarming love stories that are completely believable and will linger in your mind long after the final page is turned.