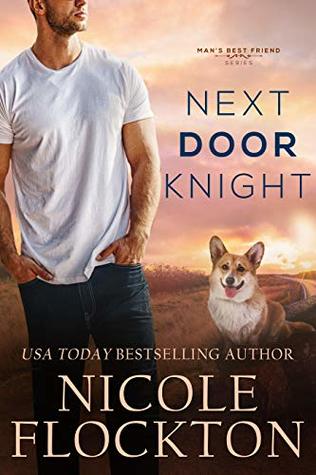 Newly single Kerry Williams is at her wit’s end. She’s juggling her injured father’s care, a new job as the manager of a hip new restaurant and her therapy dog Willow volunteering at the Veteran’s Center — all while struggling to rise above her humiliating heartbreak. When her father’s caretaker fails to show one evening, she’s terrified she’ll lose her job. And then Willow runs away. Panicked, Kerry gives chase and immediately runs smack into a tall, dark and sexy wall of muscle, palming a squirming bundle of fur. Her new hero seems like an answer to her prayers.

The last thing K-9 officer Caleb Bradshaw wants is to babysit his neighbor’s father and her dog. He’s facing a potentially career-ending injury and grieving the death of his working partner, Trigger. Sure he can handle a cranky old man, but the quiet comfort of Willow who follows him around with liquid-eyed sympathy tugs at the heart he’s trying to keep walled-off after his many painful losses.

Kerry knows Willow can ease Caleb’s grief, but he continues to push her away. Even though her life is in shambles and she too should walk, Kerry knows she can’t and won’t. Will Caleb accept her help or will he close himself off completely?

I enjoyed NEXT DOOR KNIGHT on several levels, but I have to admit upfront that it is one wiggling bundle of love that truly captured my heart as Willow steals every single scene that she’s in… and rightfully so.

Kerry and Caleb both have deep emotional scars that are evident throughout their story.  Kerry is emerging from an abusive relationship, Caleb is recovering from a serious combat injury physically but also emotionally from losing his beloved K9 partner in the same incident.  While Kerry is attempting to go beyond her past she’s also overloaded with responsibilities right now, and Caleb simply wants to be left alone to deal with his grief in his own way but he really is hiding not dealing.  They have issues that are relatable, but one pup who is totally in love with her neighbor and determined to not only heal him but make him part of her family will make a huge difference in both of their lives.

NEXT DOOR KNIGHT is emotional, it will tug at your heart with empathy and a need to see two people healed, and take a chance on each other.  I was caught up in their world and their story from start to finish.  If you enjoy a romance that goes a little deeper into the trauma that life often deals, and watching two people fight their battles to find and love each other then you’ll enjoy this story.

« A Phoenix Is Forever by Ashlyn Chase
Tess by Victoria Purman »