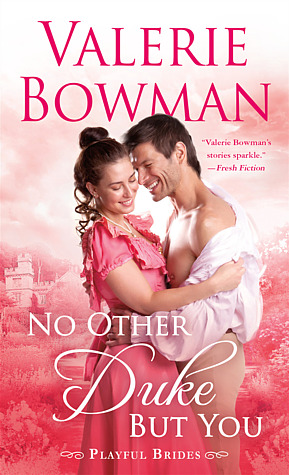 I had fun with Delilah and Thomas in NO OTHER DUKE BUT YOU, and if you love Regency Romance or have followed the Playful Brides series then I’m betting you’ll enjoy this one as well.  (Yes, the love potion is a bit over the top especially since so many characters believed in it – but the resulting chaos was entertaining.  You’ll have to decide for yourself if that is offputting to you or not — I found it entertaining and chuckled throughout)

Delilah and Thomas have been best friends forever it seems.  And Thomas has been in love with Delilah for almost that long.  Unfortunately, Delilah is completely clueless about his feelings for her and has him firmly in the friend for life zone.  Although Delilah has helped put several good marriages together through her matchmaking she had no great desire to enter into that state herself.  That is until she is given an ultimatum and takes matters into her own fumbling hands.  She has convinced herself the Duke who is the rage of the ton, and the man that every matchmaking momma wants for her own daughter would make the perfect choice for her– even though he has no idea that she even exists.  How to accomplish this deed?  Why not try a love potion?  But first mistakenly test it out on your best friend, just in case it doesn’t work.  Right.  Things go horribly wrong – or totally right from Thomas’ viewpoint since he’s never told Delilah of his feelings her “love potion” belief just might work in his favor.

I did enjoy NO OTHER DUKE BUT YOU yet I’m not blind to some of the things that didn’t work for me.  They were small in number, so I’ll not nitpick the details.  Thomas has mentioned to one of his friends in a previous book that he was in love with his best friend but she had no idea and would remain his friend.  So it’s not out of the question for Thomas to go along with the silliness of Delilah’s love potion belief.  I adored Thomas and felt he deserved his happy ending.  Delilah is – well, delightfully clueless, a bit of a ditz on many levels, and so blind to her Duke’s real feelings toward her.  I liked Delilah, but it was Thomas who stole my heart in this story.

If you’re in the mood for a lighthearted romp, a love potion gone out of control and a lovely couple finally getting their happy ever after ending, then you’ll want to pick up NO OTHER DUKE BUT YOU.

Tags: No Other Duke But You, Playful Brides #11, Regency Romance, Valerie Bowman