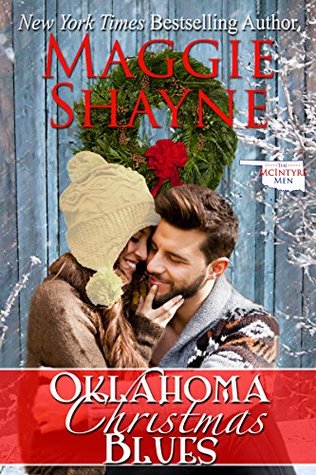 Darryl is on a quest for peace. His chance at fatherhood was taken from him long ago, and an IED in Iraq ensured he’d never get another. In Big Falls, the McIntyre brothers hire him to keep an eye on their beautiful cousin Sophie in case her criminal ex shows up. He doesn’t expect to fall head over heels.

Sophie McIntyre’s life was blown apart by a drug dealing ex who cost her her job and nearly her medical license. She comes to Big Falls because she has nowhere else to go. And the minute she gets there, things start to get better.

Is it because of that letter to Santa her Aunt Vidalia convinced her to write?

Within days she meets a beautiful man with a deeply wounded soul. And oddly, she finds herself giving him the same advice the town Santa gave to her—try believing again, and if it’s too much to believe, then just try hoping.

Because this is Big Falls, Oklahoma. Miracles are an everyday occurrence around here. Especially at Christmastime.

Parts of Sophia’s life are falling apart, but there’s one thing she can depend on and that’s family.  When the man she’d promised to marry stole pages from her prescription pad and was writing his own scripts for narcotics he was caught, and she was punished.  She lost her job as a doctor at an elite hospital in New York, her medical reputation was in danger and  she was facing possible criminal charges.  She knew the jerk wold be heading to prison soon, but her life was on hold waiting for decisions to be made that were out of her control.  Yeah, not a whole lot to be optimistic about in that train wreck.  So, she packed up and came home to Big Falls, Oklahoma to sling drinks in her uncle’s saloon along with her cousins, the McIntyre men.

Darryl has been hired as a bouncer, or security for the saloon by Sophia’s cousins, well at least that’s the cover story and they could use help with some rowdy customers a bit deep in their drinks.  The fact is that none of the men in Sophie’s family like the way her ex has hounded her and tried to break down a door to get to her.  Darryl is there for her protection, but she’d pull a hissy fit if she knew… and like all things people do to protect us, sooner or later she’s gonna find out.

Neither one expected the sparks that few between them, or what to do when a job became much more personal.

Sophie has been doing some serious thinking about where her life is going and what she truly wants, hopes for her future.  Between a visit from a surprisingly realistic town Santa to her aunt’s yearly letter to Santa ritual where she ask for her hopes for the coming year to come true – well, let’s just say that Sophie has written her own letter to Santa.  All the hopes that she’s been afraid to voice flow easily in a letter to the bringer of dreams.  And who knows, it worked for her aunt.

Oklahoma Christmas Blues is such a fun, thoughtful story that combines the magic of Christmas with the reality of falling in love unexpectedly.  Life often has plans far different than our own, and Sophie and Darryl are about to discover the truth in that statement.  Darryl has secrets, pains from his past that he needs to share with the woman he’s falling in love with.  Sophie needs to trust in her instincts, and maybe be a bit open minded as well.  They make a great couple and it was fun to follow along on their journey of discovering each other.  It was also fun to touch base with some old friends from earlier connecting series – I happen to love long, involved series that build bridges  between series through family.   I’ve picked up the next two stories in this series, and I can’t wait to get started on them.

One lesson that Sophie and Darryl did learn that we could take note of… never give up hope, you have no idea when those wishes you’ve made will be answered.  Hope is the one thing you can depend on.

The 12 Dares of Christmas by Leigh W. Stuart

The 12 Dares of Christmas by Leigh W. Stuart