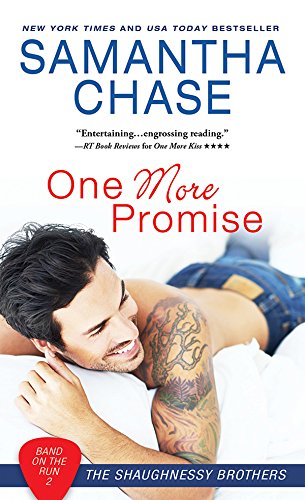 Dylan Anders is making amends. After hitting rock bottom, he’s got something to prove and this time, there’s no looking back. Unfortunately, looking forward has him trying to volunteer for a literacy campaign where he has to win the approval of the one woman who seems unaffected by his charm. He never expected it to be easy, but he certainly never expected to have to work quite so hard to win one woman’s approval.

Ambitious Paige Walters is ecstatic when she’s hired to recruit musicians for a literacy campaign—it’s her chance to prove she’s got the chops to make it in the family business. When Dylan steps in, she immediately dislikes him and vows not to let the fallen idol screw it up. But as the work brings Paige and Dylan closer together, their attraction grows…and so do their challenges..

Titles in the Band on the Run series include:  One More Kiss – One More Promise – One More Moment –

Sometimes a story or the characters will hit all the right emotional hot spots for me and I’m captivated from the first chapter.  That was the case with One More Promise.  Yeah, Dylan had screwed up, he’d let his demons get the best of him… for a while.  That was then, this is a new day and a new chance to show himself the man he could be.  He wasn’t so much worried about others opinions or the fans of the band – if he proved himself to the one person who mattered most – himself – and his friends, then that was all that mattered.  Right up until he wanted to show one stubborn woman that he was worth taking a chance of a lifetime on, the one woman who mattered more than anything else.

Paige struggled with her family and proving herself to her father.  She had talent, she was far more than capable of handling their clients.  The fact that her sister constantly showed up at the last minute, did the least work and took all the credit and glory should have become expected by now.  This time Paige was left with babysitting a rock star straight from rehab – exactly what she didn’t want for this project.  She might not have known why Dylan was so famous, but over time this man showed himself to be far more than she ever imagined possible in her life.  Someone who saw her worth, took her side and wanted so much more from her.  It was a risk, but wasn’t it time that she started taking back her life and taking a few risks along the way?

I adored Paige and Dylan together.  His rehab, community service and fame were beside the point in this story.  Her struggles with her dad and sister were a constant in her life but finding Dylan made her look at things quite differently.  As they slowly discovered the true people they were behind the masks Dylan and Paige began to fight to remain together.  One More Promise is an endearing romance, a discovery of who you really are at the core and finding out that someone can love you exactly as you are.

I really enjoyed Dylan and Paige’s story and would recommend One More Promise to any Contemporary Romance reader who loves stories where the people are the main attraction, interesting secondary characters and a really, really good story.