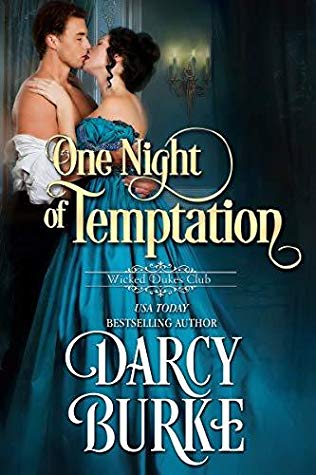 I fell in love with ONE NIGHT OF TEMPTATION almost as quickly as Hugh and Pen became attracted to each other – and that’s not a bad thing at all.  I don’t mind instant attraction as some people do.  Sometimes a person just “knows”, follows their instinct that another person is someone they want to know and be with – there is nothing wrong with that.  I see the draw that Hugh and Pen had toward each other not as strictly love at first sight, but definitely attraction and interest at first glance.

Penelope is facing a horrid future as the wife of an odious man old enough to be her grandfather simply because of her father’s political aspirations.  She sets out to bring about her own “ruination” but reality quickly sets in when things do not go as planned.  Hugh comes to her rescue and is the first person to actually listen to her concerns, her fears as he offers her what help he can.  They are socially too distant for anything to come of their attraction – or are they?  With a bit of help from Hugh’s friends in the Wicked Dukes Club who knows what might happen for them?

I enjoyed this couple and was delighted to run into old friends from the previous stories as well.  ONE NIGHT OF TEMPTATION wraps up this series with a story that will touch your heart, give you a few chuckles, a definite sexual tension filled romance that keeps in mind that Hugh is, in fact, a rector and Pen is a society lady.  I had fun with this one and I’ll admit that I’m sorry to see this series come to an end.  Erica Ridley and Darcy Burke made this duo author series lively, entertaining, sensuous and full of characters that I’d love to have as friends.  So when can we expect you ladies to pair up again? (hopeful smile)

« Justified by Jay Crownover
A Cowboy’s Salvation by Megan Ryder »