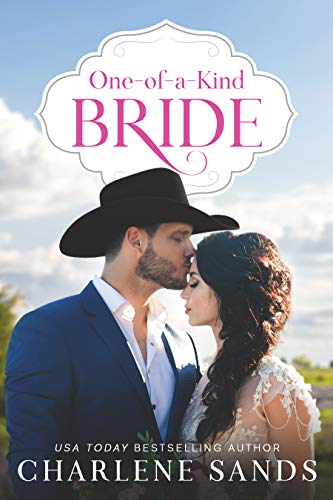 One of a Kind Bride takes us back to Last Stand, Texas for a second chance romance that hits all the emotions right on target.  Taylor often visited her cousins in Last Stand and formed a deep friendship and more with Coop.  Fate wasn’t kind to them back then and each moved on.  Now, Taylor is back in town after losing a job that she was perfect for, but the company didn’t feel her bridal designs were a fit for them any longer.  Disappointment turns to determination as Taylor heads to her cousin’s wedding preparations far too early to put the finishing touches on the dress for Julie, as well as figure out what she’s going to do next.  The last person she expected to run into almost immediately was Coop.  Neither are the same person they were in their youth – but the spark is still there between them.  Dare they risk igniting that spark into a forever future?

I adored this couple.  They are realistic and believable in a story that flows smoothly and drew me in right from the start.  I always love going back to Last Stand, Texas with its, at times, quirky residents and small town, down-home feel.  I don’t intend to give anything away – but I can say that One of a Kind Bride brought me laughter and tears, feel-good emotions, and a couple to root for to find their happily ever after future.  If you love a small-town romance with a couple you’d consider friends, then pick this one up as soon as possible.