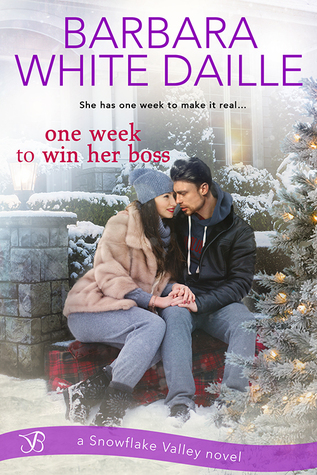 Single mom Amber Barnett loves family, kids, Christmas…and unfortunately, her boss, confirmed bachelor Michael DeFranco. It’s a crush she really needs to get over. Except, when she’s temporarily forced from her apartment, her only option is to stay at Michael’s private ski lodge, where she’s the housekeeper. No problem. Her handsome boss rarely visits Snowflake Valley unexpectedly, plus he’s spending the holidays with his family. Or so she thinks…

A stormy Christmas Eve reunion leaves Michael seeking the solitude of his lodge, where he finds Amber in residence—and in trouble. Attempting to save her from her matchmaking family, he announces they’re a couple. His good deed backfires when they’re instantly included in each and every holiday event in town. So much for solitude.

Only the more time he spends with the beautiful, cheery brunette, the more he yearns to make things real between them. But he and Amber want different things, and Michael could never be the family man she’s looking for.

Titles in the Snowflake Valley series include:  Snowbound with Mr. Wrong – One Week to Win Her Boss –

Amber wasn’t expecting Michael to show up at his lodge in Snowflake Valley for Christmas week, he was supposed to  be with his family for the holiday.  So she felt safe in making a somewhat extended visit to the lodge where she worked as housekeeper/hostess during his absence.  She’d helped out a friend with a loan but he hadn’t paid it back in time to help herself keep the electric on in  her apartment – so it was either stay here at the lodge with her daughter Penny or return home and face the looks of her family who always, it seemed, had to rescue her from something.  And it would have worked out perfectly – if Michael hadn’t walked out on his family celebrations to come to the lodge to catch up on paperwork.  Now things were about to get complicated.

One Week to Win Her Boss is a fun, emotional and, at times, complicated story of one couple with opposite views on family as they work their way through falling in love.  Amber comes from a large family of loving parents and brothers and sisters.  She’s the one who always seems to be needing rescuing, or at least it seems that way.  Her marriage crumbled almost as soon as it started when her husband went back on his love of children declarations.  He left the same day he was told they were expecting a baby.  Truth is, better off without him.  Now Amber has her adorable daughter Penny, a mad crush on her boss and, once again, needs rescued.  That’s why she’s hiding out at Michel’s lodge.  Michael is the opposite in many ways.  He’s not a fan of Christmas.  Or family.  Or children.  At.  All.  He grew up much different from Amber, and his childhood memories are of a very different environment.  He practically raised his stepbrothers and half-brothers — and he’s done.  He feels he is nothing more than a source of fast cash or paying the bill to his family.  So he keeps his distance.  Every time he gives in and tries again, it’s the same result – disaster.

Michael and Amber are pulled into her family’s celebration of the season – and soon they are pretending to be involved.  Granted the pretend is for a good reason, but it still makes life complicated.  Amber will fall deeper in love with Michael.  And Michael – well, he won’t mean to but he’ll end up hurting Amber with his bah humbug attitude and thoughtless comments about family.  At first Michael won’t even see the softening in his views but when he does he’ll fight with himself, but up barriers and try to keep the truth from himself.  Sometimes falling in love isn’t the easiest thing to do – especially when family is involved.

I enjoyed this story very much.  The entire cast is vividly realistic, and Michael and Amber along with Penny fit so well together.  There are issues to be dealt with, family to once again disappoint people and a rocky road on the way to a happy ending for Michael and Amber.  But it’s a trip well worth the time for their story comes alive with believable, it could happen moments.  That is what separates stories for me, whether I can really believe the reactions of the people involved… and One Week to Win Her Boss gives us a family, a town full of believable nice and not so nice people.

This is a story that will go on my yearly re-read list – and I’d highly recommend it for any Romance reader.  You don’t have to have read the first in this series to understand Michael and Amber’s story, but the main couple there in Snowbound with Mr. Wrong are here as secondary characters – besides it’s a great story too.