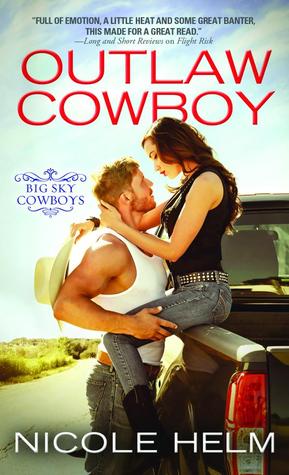 Ever since his father’s accident, Caleb Shaw vowed he’d mend his wild ways, and he means to keep his word. He’s a changed man. A better man. And he knows he should want absolutely nothing to do with his crazy old life…or the maddening temptation that is Delia Rogers.

Because Delia? Is nothing but trouble.

Delia’s been stealing her sisters away from their violent father ever since she was old enough to fight back. But now with the police on her trail and all her bridges burned, there’s nowhere left to run but back into the arms of the one cowboy she knows she shouldn’t need. Caleb has always been too good for her, no matter how bad he claimed to be. Yet when close quarters turn into something more, Delia and Caleb are forced to decide what really matters: mending their reputations or healing their wary hearts.

Read on for my thoughts on Outlaw Cowboy.  No true spoilers, promise.

Cowboy?  Definitely.  Outlaw?  Hmm, more like a guy who’s been through hell and is climbing out of that hole by his fingertips on a very slippery slope.

Caleb is a man determined to be better than he used to be.  A recovering alcoholic, Caleb has the weight of his family’s ranch on his shoulders.  As well as his injured, now wheelchair bound father and other family members who need him to walk the straight and narrow.  In a desperate need for cash to keep the ranch running, he’s leased off some of the land – but that lease comes with a crap load of “you must do this..” rules.  And one of those rules will be broken to smithereens if he gets involved with Delia.

Running from the law?  Maybe.  The charge?  Being stupid in her choice of ex-boyfriends.

In her younger years, Delia had been firmly under the thumb of her abusive father.  Then she got old enough and determined enough to fight back and leave.  Since then she has been slowly getting her sisters away from the man she despises, the man who thinks nothing of further abusing the daughters he was supposed to love and protect.  Now with one last sister to rescue, Delia is back in her hometown, and desperate to stay off of the radar of the townsfolk and the police who want to question her.

She’s hiding out on Caleb’s property.  He was the one person she shouldn’t have run to, he didn’t need her troubles on top of his own.  But logic has no place in the mind of a woman determined to save her sister or claim the man she could love for the rest of her life.

Outlaw Cowboy pack a powerful emotional punch.  And it brings to light Domestic Violence and Family Abuse, something that I am always glad to see an author address, for it exists far more than most of us ever realize.  Delia and Caleb were not bad people, and they really hadn’t done anything world ending bad – they had made poor choices, yes.  She had survived her father’s abuse.  He had turned his life around and said no to the drinks that would destroy his life.  In some ways they are each a product of their upbringing, and equally determined to make their lives so much different than their past.

With sassy banter, quirky wit and some serious sexual tension, Outlaw Cowboy is a fun, engaging read.  Yes, fun, in spite of some of the subject matter that is touched upon – Caleb and Delia’s interaction is often simply fun to read.

I don’t believe you have to have read the first story in this series to understand and enjoy this one.  But, of course, all series make much more sense if read in order.  I enjoyed my time spent with Caleb and Delia.  And I would definitely recommend Outlaw Cowboy and the series, Big Sky Cowboys to anyone who enjoys a good, solid story and a fun romance.

*I received an e-ARC of Outlaw Cowboy from the publisher, Sourcebooks Casablanca and NetGalley in exchange for an honest review. That does not change what I think of this novel.*

Descended From Dragons by Tricia Owens

Descended From Dragons by Tricia Owens