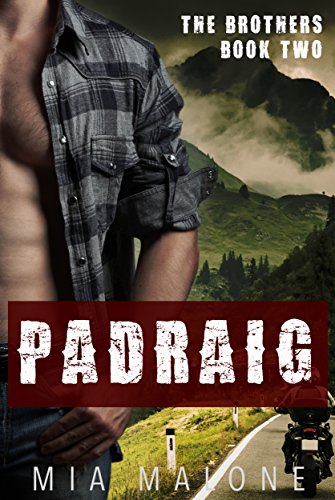 ‘Padraig‘ is the second title in ‘The Brothers‘ series, and it is a sizzling sexy, emotion engaging, action-packed ride from beginning to the final page… and then you’ll wish for just a touch more.  While I had read the complete series, when this series came up in a Facebook group discussion I realized that I hadn’t reviewed all of the titles back then – so, I fit weekend re-reads into my schedule recently, and yes, the stories are just as intense, sexy, and engaging as when I first read them.  Perhaps a touch more now since I have a bit of background and can “see” those little details I might have missed before.

Paddy and Jenny have known each other most of their lives – and loved each other from afar as well.  Back then Paddy saw an age difference as the reason to not pursue Jenny believing he had time.  Unfortunately, he didn’t cut back on his time with the ladies, and one woman made sure that Paddy would be hers by sabotaging the condoms resulting in Paddy’s daughter, Annie.  He stayed in the marriage for his daughter’s sake, a sexless, angry marriage that finally ended when Annie was old enough and he kicked the now ex-wife to the curb.  But the damage to what might have been for Jenny and Paddy had been done.  Jenny quickly married someone else – and that was a mistake she would pay for over the years.

I understood both Paddy’s and Jenny’s reasons, even if I always felt that if they’d only talked about their feelings for each other back in their youth then all of this could have been avoided.  But book characters rarely listen to me, I try but they have a mind of their own.

Today both Jenny and Paddy are free to pursue whatever they desire.  For Paddy, that’s Jenny but let’s be frank, he’s still afraid that she won’t want him.  Jenny is convinced that Paddy is nothing more than a manwhore and she’s not falling for that.  She might admit, when drunk enough, that she still has feelings for the jerk but admit that – not happening.  Right up until Paddy has claimed her to another MC president and he has to get Jenny onboard with that fake relationship fast.  Perfect chance for them each, if it all works the right way.

There is a real danger here, as well as hot, sexy, sizzling chemistry.  We get to know the other friends of Paddy and Gib a bit better, and they truly are a tight-knit group of men who are now finding their own happiness with the right woman.  Callum (Gib’s son) and Annie (Paddy’s daughter) are a secondary romance in this story – and I loved every moment of that romance.

I enjoyed ‘Padraig‘ exactly as it was presented to me.  It’s action-packed, totally alpha men, and strong women finding love in their 50’s… and sex doesn’t stop at some magical number.  There are tense interactions, times filled with sexy moments, lots of laughter, bonding between friends, and a sense of destiny as two people who were always meant for each other finally get that desire fulfilled.  I enjoyed myself immensely back in this world once again, and would not hesitate to recommend this story or series.

As the author did, I’m also going to say again that there is a touch of kink, a lot of sexy times, and some intense situations in this story (series) so if that is not your thing just be aware.