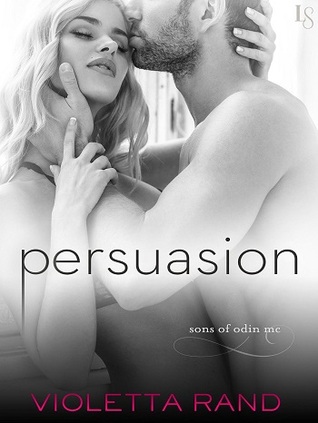 Lang Anderson may be the new leader of the Sons of Odin motorcycle club, but his personal life is in shreds. He’s struggling to take care of his three young sisters in the wake of tragedy, while rumors of drug dealing within his ranks jeopardize everything he’s built. The last thing he needs is another distraction—like a bar brawl over a woman—but Lang is a sucker for a damsel in distress. And this one gets him roaring like a finely tuned engine.

High school guidance counselor Lily Gallo is no fender bunny. So why can’t she get Lang off her mind? Lily’s head says the rugged, rough-and-tumble biker who came to her aid is bad news. Her body begs to differ. But when Lang’s troubled kid sister walks into her office, Lily’s determined to help, even if it puts her in the crossfire of a gang war. On a crash course with danger and desire, Lily partners up with Lang to fight for his family—and for love.

Read on for my thoughts on Persuasion.  No true spoilers, promise.

Sons of Odin promises to be an exciting, addicting series if the first novel, Persuasion, is any indication of what more is to come.  For those readers who devour the motorcycle club genre of romance, I have found that every author (much like any genre) puts their own unique spin or descriptions on the concept of a MC… no two are exactly alike.  Some differences are jarring others are subtle.   While there were some differences in Persuasion from other MCs that I’ve read, it didn’t take me long to fall into the rhythm of this particular concept.

Lang is the new president of the Sons of Odin motorcycle club, as VP it was his place to step into when the former president headed off to prison.  Yet, Lang has more than just his club brothers to watch over as he is the guardian for his three younger sisters after their parents deaths.  In one area Lang is supreme in his leadership abilities – parenting young girls is a whole different game, but one that he has to get right quick before they all end up in a heap of trouble.

Lily found herself in a different type of trouble when she and her best friend had ventured out for a night of fun.  With a guy who won’t take now for an answer, she is quickly and abruptly rescued by one of the most sinfully, handsome bad boys she’s ever run into.  When their connection is further put to the test by Lang’s sister ending up in Lily’s guidance counselor office, Lily makes a decision to help this family.  A decision that will put her in danger and possibly with the one man who can change her life forever – in a very delicious, good way.

I enjoyed Persuasion very much and I’m looking forward to what the rest of the series brings.  Lang and Lily were right together in an opposites attract way – and talk about smokin’ hot together.  Yeah, these two will burn their way through the sheets and straight into your “love that couple” spot.  While all motorcycle club novels are different as well as similar, I’d have to say – give  Persuasion a chance to capture your imagination and the differences will soon fall away.

*I received an e-ARC of Persuasion from the publisher and NetGalley in exchange for an honest review. That does not change what I think of this novel.*

A Matter of Time by Margaret Locke

A Matter of Time by Margaret Locke