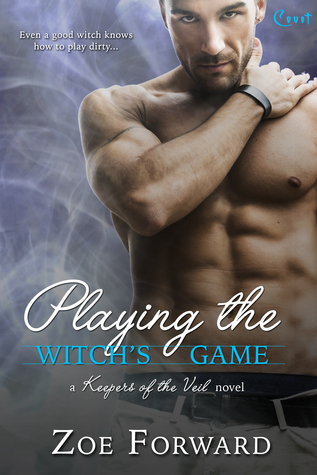 There are so many red flag warnings to the reader in Playing The Witch’s Game – we know that there is no logical reason for Jen to be so trusting, or believing of Owen… or even why she believes so strongly that he is her destined mate.  But that’s the luxury and the fun of being the reader not the character.

Nicokai and Jennifer have a bit of hot history so when he does the quick rescue when one of her spells goes sideways it’s not surprising that Jen would see him as the not so perfect fake boyfriend she needs in order to get on Extreme Survivor.  Nicolai knows that she’s in trouble deep for one very obvious reason – he knows who her destined mate is – and it sure ain’t Owen.  Now keeping his mate safe, alive and whole by the ending of this reality show falls into Nicolai’s capable, sexy hands.

There are so many little and huge twists ‘n turns in this third installment of the Keepers of the Veil series – that I’m left with the task of stating that less is more for this review.  Because I do not want to give away spoilers, and it would be do easy to do that, I’m going to be a bit more vague than I normally would be.

There is evil afoot and not all of the facts are laid out for us to get at the very start, yet the reader does realize that something is just not right about anything involving this reality show.  Before it’s ending Jen and Nic will fight their way to the truth and each other.  So many little things to pick up on throughout the story – very well written and timed, in my opinion.

If you have followed the series so far then you will feel right at home with Playing The Witch’s Game.  While it could be read as a standalone, your experience would be so much greater and involved if you’ve read the books in order… but, what series isn’t better read that way.  So if you’ve picked it up with little backstory, hold on this story is well worth your time.  And if you are continuing along the overall pathway, then you’re in for a treat in two hot and sexy, stubborn and independent people who just happen to be perfect for each other – half the fun of the book is their discovering and working on that part of their lives.  😉

I wold definitely recommend this one for any lover of Paranormal Romance.  It has a good, solid story – a believable and likable couple – and some nasty people to be put in their place.  All the aspects of a really good and satisfying romance.  Pick it up and indulge yourself.

*I received an e-ARC of Playing The Witch’s Game from the publisher and NetGalley in exchange for an honest review. That does not change what I think of this novel.*

Doing It Scared But Determined

Marry Me by Karen Stivali

Doing It Scared But Determined

Marry Me by Karen Stivali