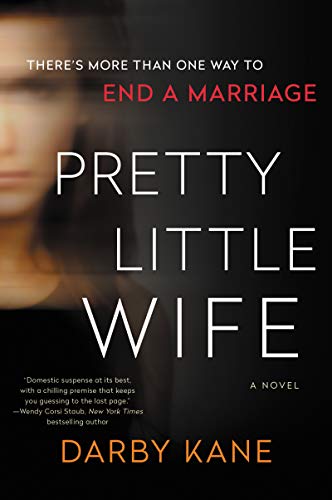 What a diabolically delicious debut!

…and in reality, I’d really like to say “That’s it, that’s the review.  Nothing more needs to be said.”  But, I suspect you’d like a bit more than that.  No plot giveaways here, though.  Not a one, you really need to fall into this story and follow it from beginning to ending yourself.

The only really likable character in this book (for me) was Ginny, the police investigator.  So why rave about a bunch of unlikeable characters?  Simple.  They fit perfectly into this little world, their lack of anything I could, often on closer inspection, find redeeming or “likable” is part of the draw to Pretty Little Wife.  So many secrets to be discovered throughout this story – many I didn’t see coming in any way, shape, or form.  That’s what a really good Thriller / Mystery novel should deliver, in my opinion.

There are other storylines to discover as we puzzle over exactly what did happen to Aaron (or, at least, to his body).   And some may not seem all that important, but don’t let your guard down, you will never really know where some lead until the very ending of this one.

All you’d really need to know before picking up Pretty Little Wife can be found in the cover description blurb.  If that last line isn’t enough to grab your attention then I don’t know what would.

The only thing plotwise that I’m willing to say is… I did not see that coming.  At all.  Oh, I had my guesses, my armchair detective hat firmly on but I didn’t see that.

I was engaged from the start, followed all the various twists and turns wondering where we were headed, and made some fascinating discoveries along the way.  If you enjoy a really good Thriller / Mystery where you really do need to think about what you’re being told and wonder “what next” throughout the building tensions, then Pretty Little Wife is a perfect novel to start 2021 with.

Oh, this part of my review isn’t going to the retail sites or Goodreads  – if you enjoyed Pretty Little Wife then you’ll be glad to know that you can, right now, go pick up titles by HelenKay Dimon who writes Romantic Suspense – Darby Kane is a new pseudonym for Thrillers.  That information is “out there” on Twitter and on the very final pages of this book, easily found if you look for it.  It’s not a secret. 🙂

I own a Kindle edition of Pretty Little Wife.

Available in paperback, audio, and for your favorite e-reader.  Mine is the Kindle.