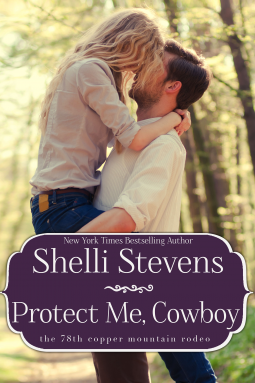 With his competing days behind him, Wyatt Marshall has settled into ranching life in Marietta, Montana. But with the Copper Mountain Rodeo, his only exception, just around the corner, the last thing he needs is a distraction – especially one in the form of a pretty, yet vaguely familiar country singer.

For Claire Miller, it’s been almost a year since she fled Las Vegas with only her purse and the clothes on her back, and she’s been laying low in Montana with a new image. When she and her country band travel to perform in the small town of Marietta, she doesn’t plan on getting stranded there for several days. Or for an innocent offer to stay at a nearby ranch to turn out to be more than she bargained for: she recognizes its owner to be the same sexy cowboy she got hot and heavy with – then stood up – in Vegas.

With the passion flaring between them and Wyatt getting closer to putting the pieces together, Claire is ready to run again, not knowing the danger that sent her fleeing in the first place is close on her heels.

Claire knew the fine art of running all too well.  She’d been doing it most of her life.  One magical night she took a risk and flirted with the cowboy at the dive bar she sang at in Las Vegas.  He’d just come off a huge win, and with her “keeper” out for the night she indulged herself in some flirting, a few drinks and the thought that she could have one night out of her life just for herself.  It wasn’t to be.  Her stalker found her alone, before she could have that special evening play out as they’d hoped.  Yes, she escaped and ran… and most likely, she’d be running for the rest of her life.

Wyatt stared at the guest his sister had brought back to the ranch to rent one of their cabins for the rodeo weekend.  A singer for the main band, one who hadn’t thought to reserve a room in town.  Not too wise or worldly this blonde beauty – who reminded him of someone.  The longer he was around Claire the more he was certain that she was his mysterious Vegas girl, Sin.  Change the hair color and style, pour on some heavier make up and she’d be Sin’s twin.  So he started to toss out comments, hints that he knew full well just who she was… even though he wasn’t truly sure himself.  That one night he’d been stood up, played… he wanted answers, and she had them.

Protect Me, Cowboy is such an emotion grabbing romance.  Wyatt had begun to lose his heart that night in Vegas, although he’d certainly not admit to it.  He thought they’d made a connection and when she left him high and dry without a word he was angry and surprisingly hurt.  Claire had done what was necessary for her own safety.  Did she regret leaving Wyatt that night?  Of course, but it wasn’t only her own safety that had kept her away – the man who stalked her was dangerous and she’d not visit his evil on anyone she remotely cared about.

Perhaps when she reinvented herself coming to Montana was a subconscious bid to find Wyatt, although the odds of that were truly against her.  Now that she had him, could she possibly keep him… without endangering him or his family.

I enjoyed Wyatt and Claire’s romance very much.  They may appear as different as day and night, but they work together.  We also get to catch up with Shelby a bit from Catch Me, Cowboy as she is Wyatt’s partner.  Carol, the town gossip is just as bad as ever but this time she’s put a life in danger with her ways.  When we learn Claire’s background it’s obvious how brave and secure she’s become with Wyatt, and she’ll risk everything to keep him safe.  Even if you’ve never been to Marietta, Montana (through the numerous series), I still believe you’d feel right at home and enjoy this story.