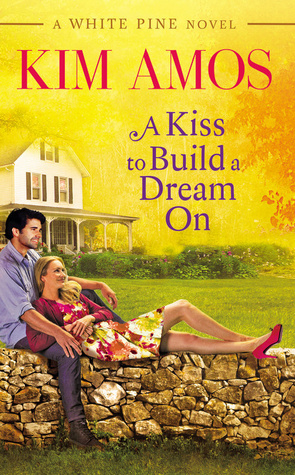 If pride goes before a fall, Willa Masterson’s trip back to White Pine, Minnesota, should be one heck of a tumble. The girl who left her hometown—and her first love, Burk Olmstead—in the rearview twelve years ago was spoiled and headstrong. But the woman who returns is determined to rebuild: first her family house; then her relationships with everyone in town . . . starting with a certain tall, dark, and sexy contractor.

Burk has no reason to believe Willa has changed, and every reason to discourage her from converting the Masterson house into a B&B. He has plans of his own for that house, and they certainly don’t include a no-vacancy sign. But Burk didn’t count on how distracting Willa’s bright green eyes or her all-too-familiar touch would feel—or how impossible she will be to resist…

Read on for my thoughts on A Kiss To Build A Dream On.  No true spoilers, promise.

Willa shook off the dust of White Pine years ago.  While her reasons for leaving might have been selfish and foolish, still she made her choice.  Now that she has been forced back to her hometown by circumstances that weren’t entirely beyond her control she has a lot to atone for.

Burk sure didn’t expect Willa to return home from her big city life.  She left him behind without a word and the hurt of that betrayal still stung, he had to admit.  But the important fact was that he had to get her back out of town as soon as he could.  Not only for his own sanity and his plans for her family home, but before she captured his heart again.  And that was something he could not afford.

During her high school years Willa had been  – well, let’s just be honest here – she’d been a royal, privileged, spoiled brat, a complete and total bitch.  The fact that she acknowledged that now, years later, does count in her favor.  But she hurt a lot of people with her nasty words and actions.  It will not be easy to re establish herself as a member of the community wanting to start up a business and live in her hometown once again.

I enjoyed this first novel in the White Pine series.  A woman who must make up for her past actions and a man who really never stopped loving her have a rough road ahead of them in this one.  I have to admit to enjoying seeing a total bitch get her due, even if I did sympathise with her on some levels.  Come on, we’ve all done stupid things, said things that we regret.  Maybe we apologized within minutes or days, not never or years later.  But we’ve all suffered the stupidness of being young.  I appreciated that she got what she perhaps deserved from some people from her past, but also that it didn’t take over the entire story.

I loved the interior design comments sprinkled throughout the novel.  And I might have picked up a few ideas to use in my own home.  And the home cooking – excuse my tummy growls.

Overall, this was an enjoyable reading experience and I would recommend A Kiss To Build A Dream On.  It gets a 4 outta 5 on my rating system.

My rating scale = 4 outta 5 = a really, excellent novel that was great just didn’t go beyond.

*I received an e-ARC of A Kiss To Build A Dream On from the publisher and NetGalley in exchange for an honest review. That does not change what I think of this novel.*