Review: A Promise of Home by Wendy Vella 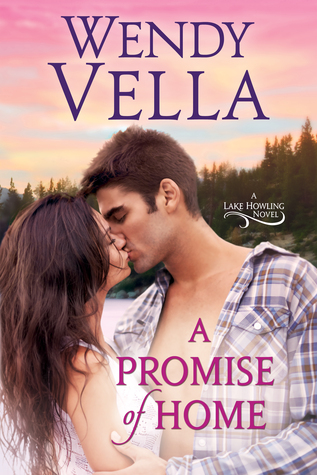 When Branna O’Donnell heads back to Lake Howling, Oregon, she’s not sure what to expect. It’s a place that holds plenty of memories, both good and bad, but Branna is determined to find some peace there from the demons of her past. However, she soon realizes that living in a small town again comes with complications, and one of them is named Jake McBride.

Once the town golden boy, Dr. McBride has returned from Iraq angry and, like her, shouldering a few emotional scars. They strike sparks off each other from the outset, and Branna knows that if she gives in to the attraction between them it’s going to result in a world of pain. The problem is she’s not sure how to walk away.

Read on for my thoughts on A Promise of Home.  No true spoilers, promise.

Branna’s return to Lake Howling, a town that she called home for three brief, pain filled years brought back memories that she wasn’t quite sure what to do with, so as usual she ignored them.  She had left for college and never looked back, refusing to feel regret at shaking the dust of this small Oregon town off of her shoes.

The only person she had kept in contact with was Georgie.  Her mentor, her friend and in many ways her savior.  It was Georgie who had taught Branna the value of herself, to cook, to write, to be whatever she wanted to be.  It was the loving friendship of Georgie and her husband Dan that kept Branna sane during those last years of high school.  Now Georgie was gone, and she had left her home and Geraldine, her classic Mustang in Branna’s care.  She could live here, write here and lose herself here – if the townspeople would let her.

Jake had been that kid in high school that everyone liked, wanted to be around and it was believed had an amazing future ahead of him.  War would change that.  Jake had taken his talent for medicine onto the battlefields, and what he saw, the death that he dealt with on an almost daily basis would haunt him and one experience would forever change him.  He left the medical world to his mother now, as the town’s doctor she would have expected to see Jake join her in her practice, taking care of their friends and neighbors.  Instead, Jake now took care of the town’s mechanical needs, fixing cars and trucks instead of people’s lives.  Jake was not the man everyone knew anymore, what he brought back home were nightmares and pain.

A Promise of Home is a novel steeped in the life and values of small town, USA.  A place where people knew you, your history (good and best forgotten) and where neighbors spoke to each other on the streets and were there for you in the hard times, while celebrating the good times.  This town has accepted and taken in Branna as one of their own,, and while she is at first uncomfortable with that closeness it will soon grow on her as second nature.  This story is populated with lively, interesting people and some who are not quite what they seem on the surface.  Since I’ve already picked up the second novel in this series, The Texan Meets His Match, I know that many of the people in this small town will have their own stories to tell and I’m looking forward to that.

Branna and Jake were a powerful couple.  Their backstory, and the developing relationship between them is the backbone of A Promise of Home.  Both are wounded spirits from different causes, both refuse to deal with their own issues but do not hesitate to take on the troubles of the other.  Jake does a wonderful job of caring for Branna, bringing her out of her shell and protecting her when she needs him the most.  Their love story is deep, satisfying, sensuous and believable.

I enjoyed A Promise of Home very much and would not hesitate to recommend this one to any romance reader.  If you enjoy richly populated series with a hometown feel and lots of handsome men in the wings then you’ll enjoy this novel.

*I received an e-ARC of A Promise of Home from the publisher and NetGalley in exchange for an honest review. That does not change what I think of this novel.*

Review: Sweet Nothing by Alison May

Review: Falling for the P. I. by Victoria James

Review: Sweet Nothing by Alison May

Review: Falling for the P. I. by Victoria James