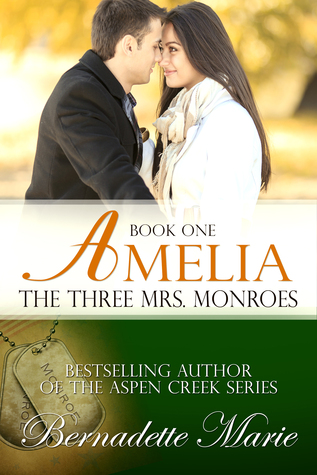 Amelia Monroe had felt the sharp pain from the loss of a soldier before-Adam Monroe’s death didn’t have that same effect.

Sam Jackson had one job-deliver Adam Monroe’s revised will. Even he couldn’t have anticipated that he’d be entangled in the web of lies his client had woven.

Doing what is right had been inbred in Amelia. She’d planned to say her goodbyes and start fresh. Staying in Adam’s small town with his other lies, that wasn’t part of her plan.

Read on for my thoughts on Amelia~The Three Mrs. Monroes.  No true spoilers, promise.

Adam Monroe was a nasty piece of pond scum.  Okay, he’d died a soldier in a battle for honor and country.  But he was still little better than pond scum.  Simply because a male is in the military and was killed in a war zone does not make him a hero or an honorable man to the three women back in the states who are living with the mountain of lies that was Adam Monroe’s legacy to them and their children.

Amelia made the trip to Oklahoma for Adam’s funeral.  And the meeting with the lawyer which apparently was required.  She watched wife number one sitting with her two young daughters and watched wife number three walk into the church and sit close to her and Sam Jackson, the lawyer… and wondered how in the hell this had come to be.  How could three intelligent women be taken in by the lies of one man who proclaimed love but never had a clue how to belong to just one woman.  Little did she know that the surprises Adam had for their lives was far, far from over.

Amelia sets the base for the series The Three Mrs. Monores.  In this first story we are introduced to the main players – Amelia, the second wife and in many ways the leader of the group of woman – Penelope, the third wife a young, idealistic, naive woman with more to handle than first impressions might give – Vivian, the first wife and mother of two young daughters, angry, bitter and the one with the most years invested in Adam’s lies.

A military brat herself, Amelia is a strong woman who takes crap from no man or woman.  She was in the process of divorcing Adam at the time of his death..  So in some ways she has already begun the grieving process, but the most she feels is anger toward a man who could live this kind of lie and hurt so many people.

Sam has some idea how much the news he will deliver at the meeting will further devastate these women.  While it’s obvious that Amelia has already begun to move on from her marriage to Adam, what he is about to hand her now will show if she is strong enough to handle anything as her personality so far has shown him.  It doesn’t help that he’s attracted to this strong willed, capable, sexy woman… but that will have to be shelved, but not for long if he has his way.

Amelia – book one of The Three Mrs. Monroes is an emotional roller coaster.  You will despise Adam for what his choice has done to these women.  You will also find that each woman has an inner strength that they never believed possible.  They will handle this unusual situation with tears, anger, laughter and eventually hope.  It’s also a love story for Amelia and Sam, but their story is woven into the overall tale seamlessly.  It is a journey that you will not want to miss.  While I picked up this story as part of The Three Wives of Adam Monroe bundle which had all three stories in one – you can also pick them up individually.  I’ll be reviewing each as a separate story.

Book One – Amelia, The Three Mrs. Monroes is available in paperback and for the Kindle