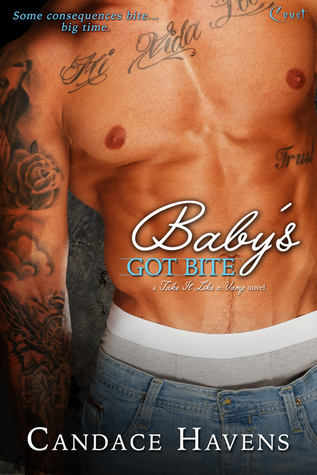 Bennett Langdon has a firm no-relationships policy. Still, it doesn’t stop her from hooking up with a super-sexy bad boy at her best friend’s wedding. After all, it’s only one night—what harm could it do? Ten weeks later, a pregnant Bennett has her answer…

Linc Monahan can’t believe it. This wasn’t supposed to happen. He’s a werewolf, and shouldn’t be able to father a child with a human. Now Linc has to find some way to tell Bennett that not only do werewolves exist, but she’s about to have a baby with one.

But when word of their surprise conception gets out, the fur hits the fan. There are people who don’t want this baby to be born—even if it means killing. Now Bennett and Linc aren’t just fighting each other . . . they’re fighting for their lives.

Read on for my thoughts on Baby’s Got Bite.  No true spoilers, promise.

I loved Linc in Take It Like A Vamp, and although her time within that story was briefer, Bennett captured my heart as well.  I cannot stress enough how important, for me, secondary characters are to a story.  They are not toss aways, thrown in for fluff and filler… they are a vital part to making the story come alive and be realistic to me.  None of us live in a vacuum, neither do our couples so the people they willingly surround themselves with matter to how I perceive the entire story.  And I’m stepping down off of my soapbox now, but the bottom line is… secondary characters matter – especially when they are so well created that they get their own story.

The first time Bennett saw Linc her thoughts were something like.. gosh, he’s hot too bad he’s gay.  Which was so far from the truth that everyone near enough to hear cracked up…especially Linc.  And for a moment, it also gave Linc an excellent view of her near nude body as Bennett was quickly changing into her bridesmaid finery created by him for their mutual friend Casey’s wedding.  So we got a brief glimpse (play on words intended) of this couple in the first novel of this series.  They definitely deserved their own story, in my and many other fans opinion – thankfully we got our wish.

Linc and Bennett hook up at Casey and Nick’s wedding celebration – and that’s all it was supposed to be, a wedding hookup.  One night, out of time, when people do foolish things when the love and magic is thick in the air.  Yes, they were definitely attracted to each other and it might have gone further if either one of them was looking for more than one night, but they weren’t.  Fate had a different plan.

When ten weeks later Bennett finds herself on the disbelieving side of almost a dozen pregnancy test sticks, she has no choice but to accept that yep, she’s pregnant.  And she sets out to do the right thing and find Linc immediately.  Might as well get that part over with because it’s not going to change.

To say Linc was surprised would be the understatement of the century.  They had used condoms, that was one thing – but there was another.  Linc is a werewolf and cannot get a human pregnant.  To his credit, he believed Bennett without doubt but knew that there had to be some supernatural magic in her family.  She obviously didn’t know it, but it had to be there.

So begins a delightful story of two equally strong willed, stubborn people.  And we take off on an adventure as Bennett and Linc adjust to becoming parents, finding Bennett’s family, start that rocky journey toward falling in love and deal with an extremely supernatural time of discovery for them both.  This romance is not going to be easy, but it will be worth it.

I loved Baby’s Got Bite just as much as I did Take It Like A Vamp.  Bennett and Linc were perfect for each other, both had trust issues, and neither one gave up on the other even in moments of extreme frustration or anger, at the heart they had each other’s backs.  Their story was charming, stormy, sexy and full of love for each other and for their child.  Nothing was going to separate them, come war or peace, they would raise their child together and love each other along the way.

Love paranormal romance?  Then you should be heading out to pick up Baby’s Got Bite.  Like, now.  And while you’re at it, make sure you start at the beginning because both books pretty much tell an amazing, sensuous, supernatural love story that you will not want to miss.  I sincerely hope this is not the last time we run into Nick and Casey or Linc and Bennett because I for one want more of their adventures.

*I received an e-ARC of Baby’s Got Bite from the publisher and NetGalley in exchange for an honest review. That does not change what I think of this novel.*

Tags: Baby's Got Bite, Candace Havens, paranormal, romance, Take it Like A Vamp #2

« Review: Take It Like A Vamp by Candace Havens
Review: Dragon Fall by Katie MacAlister »