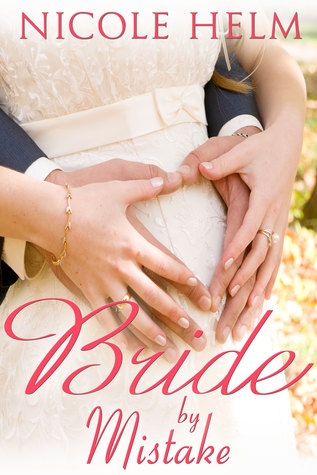 And Kaitlin Shuller’s groom of her dreams is marrying someone else… her sister.

Worst day ever. Her heart is broken, and all her carefully laid plans destroyed. Enter Beckett Larson, her older brother’s best friend and a very good bad decision.

Beckett has spent his life trying to outrun his bad reputation, but everyone already thinks the worst of him, so when Kaitlin offers herself to him — virginity and all— he just can’t say no.

But one night together has permanent consequences, and this time Beckett knows he can’t outrun his bad boy reputation. He’s determined to make Kaitlin his bride…even if he has to seduce her down the aisle.

Read on for my thoughts on Bride by Mistake.  No true spoilers, promise.

I’m usually not a fan of enemies turning into lovers and living happily ever after.  For me, personally, it normally just does not work.  But this one I’m making an exception for one simple reason – Kaitlin and Beckett have always been attracted o each other, hidden under the animosity, it’s there plain to see.  So for that reason alone I gave this couple a pass on the enemies/lover thing.

Kaitlin watched the man she loved, had buily dreams around, planned a future with get married.  To her sister.  This was not the way her dream was supposed to play out.  She had always been the good girl, the one to never get into trouble, never take risks and what did it get her?  A broken heart, that’s what.  That changes today.

Beckett had a reputation as a bad boy.  It was a reputation that he did nothing to change, didn’t go out of his way to correct people’s impression of him, right or wrong.  Behind his bad boy facade lived a lot of hurt, a lot of misunderstandings and a whole lot of take me as I am.. or not, don’t care.  So when Luke, his partner and best friend as well as Kaitlin and Sierra’s  brother literally kicked him out of the wedding.  He left.  Angry that his friend would believe he would steal from him, from their own business – and because it was what Beckett always did, run when the hurt got too deep.

So how in the world did he end up with Kaitlin on the back of his bike, headed for Marietta’s Grey’s bar for a few drinks…and who knows what next?  It was a mystery to him, but one he wasn’t walking away from.  By the end of the night, Kaitlin would have made the first reckless decision of her life, Beckett would have finally gotten the woman he loved in bed —and the results would change everything for everyone.

I really, totally fell in love with Beckett.  I hurt for him, cheered for him and mentally urged to punch Luke in the face many times over this story.  He has the bits and pieces of a bad boy, but somehow the heart is wrapped up enough in hurt that the bad boy isn’t so awful at all.  I liked Kaitlin – didn’t love her because frankly she annoyed me.  And it was enough to put me off of really rooting for the character.  Oh, I know there are people like Kaitlin  – I actually know a few, which is probably why her inability to simply believe or make a decision grated on me.  Yes, she made the right choice in the end (and without the conflict we wouldn’t have a story), I simply, sadly never totally warmed up to her.

I enjoyed Bride by Mistake, would recommend it as it is a sweet, entertaining love story.

*I received an e-ARC of Bride by Mistake from the publisher and NetGalley in exchange for an honest review. That does not change what I think of this novel.*

Bride by Mistake is available for the Kindle