Can two people who live, almost daily, with the results of the actions of crazed killers find the way to keep their own romantic relationship growing strong?  Let’s find out. 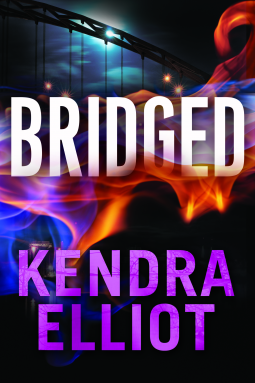 After a congressman’s tortured body is found dangling from a Portland bridge, the FBI joins the Oregon State Police to investigate the case—and FBI Special Agent Ava McLane, still recovering from a bullet wound, hunts the twisted killer alongside the man who captured her heart, police detective Mason Callahan.

But once a third body appears and all evidence points to a serial killer, the public furiously clamors for answers—and the couple’s relationship grows fractured under the pressure. Ava and Mason search in the past for clues that predict the future. And when Ava’s mentally ill twin spins out of control, the FBI agent who battles monsters every day wonders if she shares her sister’s self-destructive streak…

In the latest thrilling romantic suspense novel from award-winning author Kendra Elliot, the past and the present violently collide…and the fallout can be deadly.

*I received an e-ARC of Bridged from the publisher and NetGalley in exchange
for an honest review. That does not change what I think of this novel.*

I have not read the previous novel Vanished.   In Bridged, the relationship between Mason and Ava has already been established.  I was a bit concerned as I started this novel, but it soon became apparent that I could fall into this story without having to read the previous one.

Read on for my thoughts on Bridged.  No true spoilers, promise.

Bridged takes place a few months after the ending of Vanished.  Ava is recovering from her injuries and getting used to being in a strong, lasting relationship with Mason.  While they still have their separate homes, they’re pretty much living at Mason’s now.

It soon becomes apparent that the Oregon State Police and the FBI will be working another case together.

A man’s body has been found hanging from a bridge, a well traveled, heavily used bridge where someone should have seen something.. but no one did.  It wouldn’t have become a shared case if the dead man hadn’t turned out to be a Congressman.  And now it seems they have a serial killer using bridges to show off his latest victims.

The use of bringing in the killer for his parts of this story worked very well for me (Heck, he started off the first chapter).  Watching the killer carry out his plans,  and watching the actions of the OSP and the FBI at almost the same time gave a very Criminal Minds feel to the novel.  I even smiled to myself as a very familiar sounding person from the BAU stopped by to give his opinion of the behavior of this killer.

I was pulled into the story from the start and finished it in one setting.  I had to know the ending.

The growing relationship between Ava and Mason was charming and realistic, without being overly lovey-dovey.  They felt real and that added to the enjoyment of this novel for me.

Ava’s twin sister, Jayne has a significant part in this story and that was well played out.  Jayne needs some serious help, but until she is ready for the change she will be a painful factor in Ava’s life.  Because no matter how bad someone we love acts… we still love them and want to “save” them.

I enjoyed Bridged and hope there will be more stories in Ava and Mason’s future for us to peek in on.  Now I need to find Vanished and see how this all started.

Bridged is available at Amazon in audio book, paperback and on Kindle