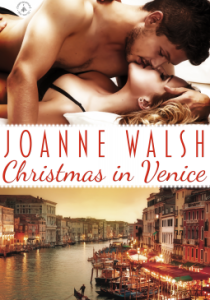 Wasn’t she supposed to dream of a white Christmas? Right now, Ashlynne wishes the blizzards, ice and fog that have left her stranded in Venice would melt away. She’s facing a dreary holiday stuck at the airport—and she’s also run into her ex-husband.

Lorenzo di Grechi insists Ashlynne stay with him at his sumptuous palazzo apartment. He’s also promising her Christmas Venetian-style: eating, drinking, and visiting the seasonal markets and musical concerts that make the city so enchanting at this time of year.

She thought she’d moved on: laid the ghosts of their marriage which had ended so sadly and badly to rest, along with how passionately she’d loved him. But the sexual attraction between them is still as potent as ever, and he seems to have changed for the better, forcing her to question her belief that he’d cheated on her at a time when she’d needed him most.

Is this just some sort of Christmas magic at work? Or a real chance to forgive and rediscover her love for Lorenzo?

*I received an e-ARC of Christmas in Venice from the publisher and NetGalley in exchange for an honest review. That does not change what I think of this novel.*

Read on for my thoughts on Christmas in Venice.  No true spoilers, promise.

We don’t often get second chances.  Ashlynne has to decide if taking a second chance on her ex-husband Lorenzo is truly worth the risk to her heart.  When her plane has been diverted to Venice due to a huge weather system across Europe, Ashlynne is already stressed.  When she looks across the terminal  into her ex-husband’s eyes resolve hardens her runaway emotions.  Here was the man who once was her world, until he destroyed it.

Lorenzo never stopped loving his wife.  Never.  But he was not a man to stay where he obviously was not wanted.  Seeing Ash at the airport brought back such memories, and in the back of his mind he couldn’t help but wonder if the unusual blizzard had been a Christmas miracle in disguise.

This couple had some serious, deep baggage to handle.  With the storm raging around them, Lorenzo and Ashlynne returned to his Venice apartment, their former home, to wait out the blizzard.  Emotions are never far from the surface as two people who meant everything to each other try to navigate through Christmas without further heartbreak.

In any novella the author has to pack a full length story into a much fewer words and still deliver a great story.  Ms Walsh was able to do that and more.  We have this couple’s story laid out in front of us- the good, the bad and the ugly – and it is heartbreaking.  How Lorenzo and Ash move beyond their pain and into a future together is a tale to touch the most hardened heart.

I know that the season is past now – but it’s never too late or too early to add another heartfelt Christmas love story to your read it again list. This one goes on my keeper shelf to enjoy for many Christmases to come.

Review: Christmas With The Laird by Scarlet Wilson

Review: Christmas With The Laird by Scarlet Wilson