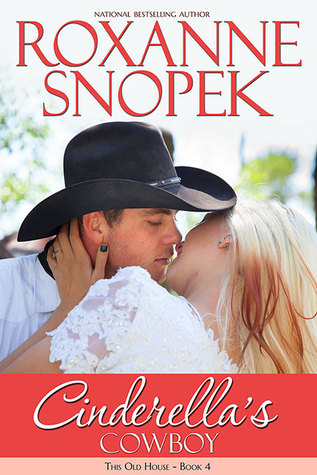 Chad Anders doesn’t know why mousy Cynthia Henley trips all over her tongue when she’s around him. Nor does he understand his undeniable attraction to this good girl. Wild and sexy is his type, like the dream-girl he caught a glimpse of years earlier he’s never forgotten.
Cynthia’s superpower is invisibility, especially with men. It’s better for everyone that way. Besides, she’s got a cat. She’s okay. But when playboy-rancher Chad hires her, she’s got a chance to shine. Professionally, at least. Until she learns of his fascination with a mysterious dream-girl, who was actually nothing more than a shy teenager on an ill-advised dare all those years ago. Cynthia knows she’s no man’s dream-girl and never will be.
But there’s magic at the ball. Princesses glow in the starlight, princes appear out of nowhere, and, sometimes, they look a lot like cowboys.

Read on for my thoughts on Cinderella’s Cowboy.  No true spoilers, promise.

Cynthia has a stepmother and two beautiful twin stepsisters, plus her family often calls her Cinderella – but that’s where the fairy tale and real life part ways.  In reality her stepmom Joanie was a wonderful woman and Maddie and DeeDee were in no way evil stepsisters – beautiful, spoiled and careless yes, but then when you looked like they did it’s almost expected.  During high school, the twins has sparked many a teenage boy’s fantasies.  Cynthia was an average girl, in her opinion, with a stutter that showed up at the worst moments of her life.  When she was nervous, like when delivering a speech that was caught on video and uploaded to Youtube, her stuttering often had disastrous results for her.  So, no – even though Cyn was a beautiful woman by any man’s definition, she saw herself more like Cinderella than she might admit to her family.

As a teenager, Cynthia had had a hero-worship crush on rodeo star Eric Anders.  The one time she stepped outside of her quiet, always the good girl image was at a pool party he attended.  There were rumors for years after of skinny dipping by the twins at that party, but only one man had gotten a look at the naked girl with a towel over her head, darting around the corner of the building.  A memory that would stay with him for years.  Now, Cynthia cringed whenever she remembered that night, and a drunken dare and thanked her lucky stars that no one had seen her disgrace.  Or so she believed.

Fast forward to the present day.  Eric Anders is a happily married man now.  Cynthia has her own business, along with the twins, although let’s just say that Cynthia ran her own business in spite of the twins.  Her company specialized in event promotions, and with a few more good jobs she could finally pay off the loan her stepmother had given her and really make the business completely her own.

That possibility was standing in her office doorway.  Handsome cowboy Chad Anders.  Rancher, playboy and brother to ex-rodeo star Eric.  He was looking to put on a pretty big event, the kick off of an organization that would put at risk kids to work refurbishing older homes, giving them job skills and a chance at success they might not otherwise have.  He wanted everything her company had to offer in making this event a whopping success and had the money to spend on it.  And he insisted on working very closely with Cynthia.

What a fun, enjoyable and laugh along with story this was.  I adored Cynthia, and Chad’s reaction to the twins was so often priceless.  It was easy to see the sparks between Chad and Cyn early on.  Watching their love story unfold was such fun.  I certainly could feel for Cynthia as she battled years of standing in the twin’s shadow – but Chad was determined to make her shine, and for that I loved that cowboy even more.  And Frohike just stole my heart… don’t recognize that name?  Read the novel, he plays a large, if underplayed part in this romance.  I really loved the epilogue on this story, it truly put the cap on the whole story for me.

Looking for a feel good, charming fairy tale of a story to sink into?  Then Cinderella’s Cowboy is exactly what you need.  I’d highly recommend this one for anyone who simply enjoys a good, clean, love story.  And who doesn’t love that, really?  Pick this one up and read a modern day Cinderella tale, Prince and all.

*I received an e-ARC of Cinderella’s Cowboy from the publisher and NetGalley in exchange for an honest review. That does not change what I think of this novel.*