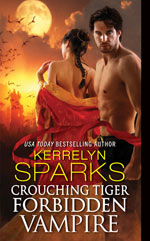 Revenge is so close.  Russell can practically taste it as he aims his shot at Master Han… only to have it stolen from him at the last second by someone else attacking the guards surrounding Master Han.  Damn.  And now the idiot is on the run from the guards and about to get themselves killed.  Reluctantly Russel teleports to a location ahead of the running attacker to do more damage to the guards, not to help the idiot.  Imagine his surprise when the “idiot” turns out to be petite, beautiful, were-tiger Princess Jia.

Jia is no pampered princess who stays safely put away from the dangers of life.  She is set on revenge.  The brutal killing of her parents by Master Han years ago has set Jia on a quest of revenge.  Unfortunately for Jia, her family believes she should stay in her palace rooms like a good little princess, and Russell believes he is the only one who can take the final revenge on Master Han.

Reluctantly Russell agrees to a partnership of sorts with Jia.  They will both go after Master Han together – each secretly believing they will be the one to strike the final blow that kills Han forever.

At first glance Jia and Russell seem like an unlikely pairing.  But the obvious attraction between them and the shared desire for revenge make them a believable couple, to me.  Nothing like a shared dream to bring folks closer.

I really wish I had held off reading this novel until I had read the start of the series.  But – vampire book – at the top of the pile – it was a waste of time thinking I wouldn’t pick it up.

Characters from previous books briefly showed up and I got a taste of their place in the series previous novels.

I enjoyed Crouching Tiger, Forbidden Vampire a lot.  It would have been better for me if I had read it last not first.

It seems a very good conclusion to the Love At Stake series.  I would definitely recommend it – after reading the entire series from the very start!  And 15 stories now have been added to my TBR pile as I now go in search of the very first novel.

Amazon currently has this title available for Kindle, Audiobook download, Paperbook and Audio CD. (and yes that is an affiliate link – gotta fund the website somehow 🙂 )