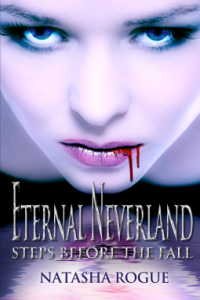 I received this copy of Eternal Neverland: Steps Before The Fall from NetGalley in exchange for an honest review.

“I’ve abandoned all my principles for you… Broken laws I held to so firm for centuries, did things I never thought myself capable of…” He kissed her as he whispered. “Was it worth it?” His tears wet her lips. “I don’t remember.”~David

Helena K. Sharpe was raised by a man who had sympathy for supernatural creatures, for the vampires his bloodline hunted for centuries. She was too young to understand how he tried to help them, but she knew it was important. Her father made her promise never to hunt them and she would do anything to keep that promise.

Until he is murdered by the very things he dedicated so much of his life to.

Orphaned and alone, Helena takes to the street, afraid for whatever’s left of her life. Without her family, she doesn’t know how—or even if—she can go on. Until a vagrant takes her under his wing and gives her a purpose. Revenge.

For six years she learns about the monsters, studies their habits, until, at 15 years old, she feels she’s ready to find the ones responsible for her parent’s death. All she has to do is become one of them. She’s cute, young, innocent…

My Review is behind the Read More.  No true spoilers, I promise.

Revenge can start early in life.  It did for Helena.  The drive for revenge against the monsters who killed her parents had years to grow stronger in her.  She used the years to learn everything about them, to hone her plans and to plot out her revenge when the time was right. That time was now.

Charlie would die.  But first she had to get him to sink his fangs into her.  To turn her so that she could then turn on him and take his miserable excuse for a life from him, just as he had taken her parent’s lives years before.

Only things did not go quite as Helena had planned.

She did manage to hide out in an old abandoned warehouse in Charlie’s New York City territory – only it wasn’t Charlie who found her first.  It was another member of his gang.  She fell down stairs in her attempt to escape, injuring herself and making it so easy to be caught.  In pain, and losing blood she was held tightly while his fangs descended toward her.  Just as his fangs were about to pierce her flesh, Helena was torn from his arms to face – Charlie.

As leader of the vampire gang that held this section of New York City, Charlie easily backed down the vampire who had caused Helena’s injuries.  Holding her tightly against him Charlie whispered assurances to Helena.  She was losing blood and soon would be food for the wild vamps of the city if he didn’t do this..now.

Just as she felt the sharp prick of pain, Charlie was interrupted in his attempt to turn her.

David stood beside them.  Believing, at first, that Helena was a child he pulled Charlie away from her and argued, then fought until Charlie backed down – and drove away into the night.  Then David realized that not a child, but a small teenager was slowly dying in his arms.  He quickly made the decision to take Helena to Sanctuary where one of their doctors would be able to help her.

The problem with that plan – Helena was dying.  Not enough of a bite to turn her, there had been no exchange of blood.  But Charlie’s blood now had entered her bloodstream and her body was slowly devouring her internal organs.  She would die an extremely painful death if David did not turn her, now.

That’s enough of a glimpse into the beginning of the story.  No need to spoil the rest.

I could understand Helena’s need for vengeance.  That wasn’t my problem.  She jumps from fear to childlike innocence to sexy vamp (and not the vampire kind) to spoiled brat to well, a mini-diva. Secure in the knowledge that she could wrap either of her sires around her pinky she was a diva.  I just couldn’t like her.  I couldn’t care if she got her revenge, turned into a model vampire or burned up in the sunlight.  I just couldn’t care.

And honestly I need to care at least a wee bit about the characters I’m investing my time in through reading their story.

If I didn’t like her why did I finish the book and would buy a sequel?  Fair question.  I enjoyed other characters in the novel and finished to find out their parts of the story.  It is for them, to see where their lives take them next, the future of this created world that I would read a sequel.  And perhaps to see if Helena can grow as a vampire beyond her diva stage.

I don’t like to feel this way at the end of a book.  Something that the author put their blood, sweat, tears and time into should have a better response from me.  But I can’t change how the book affected me..someone else may find it the best novel written.  And that’s fine, we all react differently.  This one, I just stopped really caring.

Yes, this is an Amazon affiliate link.

« Why I Joined the 2015 NetGalley Reading Challenge
Review: The Here and Now by Ann Brashares »